Ukraine’s Ruslana: From Eurovision to revolution and back 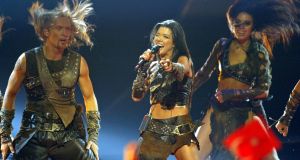 In its preview of the 2004 Eurovision song contest, The Irish Times described Ukraine’s Ruslana as a “Catherine Zeta-Jones lookalike in Xena Warrior Princess gear” and her song Wild Dances as “Europop meets Carpathian mountain music”.

As it turned out, victory in Istanbul was just the start of adventures that would make Ruslana Lyzhychko one of the faces – and voices – of two revolutions, and take her into Ukraine’s parliament and on mercy missions to its eastern warzone.

As Ukraine prepares to host its second Eurovision this week, Ruslana recalled how the contest first came to Kiev in 2005, just months after the Orange Revolution had brought pro-western politicians to power.

She had joined hundreds of thousands of demonstrators on Kiev’s central Maidan square, and even announced a hunger strike in protest at the rigged 2004 election “victory” of Russian-backed presidential candidate Viktor Yanukovich.

When the protests overturned that result and Viktor Yushchenko won repeat elections, Ruslana became a deputy in a parliament that was expected to guide Ukraine away from Russia and towards the West.

But the reform drive stalled, the revolution’s leaders turned on each other, and the old corrupt ways of governing remained unchanged. Yanukovich was soon on the comeback trail, and in summer 2007 Ruslana resigned from parliament.

“I was very disappointed with that first revolution. They sold and ruined everything. We saw that ideas could just be sold off and politicians couldn’t be trusted,” she said.

“A similar thing is happening again now with our politicians. But Ukraine has felt the power of unity and [its people] know that we can do it. Politicians won’t change much, but the people can do everything.”

Her optimism in the face of Ukraine’s struggles is fuelled by memories of her second revolution – known as EuroMaidan or the Revolution of Dignity – which drove Yanukovich into Russian exile in February 2014.

Through three freezing months, people from across Ukraine and from all walks of life turned Maidan into a vast protest camp of tents, banners, burning braziers and barricades, sustained by an army of volunteers who brought them food, firewood, warm drinks and winter clothes.

“For 90 nights I was on the stage on Maidan,” said Ruslana, whose voice often carried Ukraine’s national anthem out over the square in the biting, pre-dawn cold.

“At my concerts I use the microphone to inspire people, and on Maidan I used it to calm people down and feel safe: ‘Mir i spokoi’,” she whispered, repeating her call to protesters at times of rising tension – “Peace and quiet”.

“I lost my voice, but it came back again. It felt like Maidan was the centre of the world and life was being reborn. People could come out and show their feelings. I saw the courage and strength of the Ukrainian people there.”

After his security forces shot dead scores of protesters on Maidan, Yanukovich fled with relations and close allies to Russia, as Moscow launched its annexation of Crimea and started fomenting a separatist conflict in eastern Ukraine.

Ruslana subsequently visited the militants’ stronghold of Donetsk several times to help negotiate the release of dozens of Ukrainian servicemen captured during a war that has now killed 10,000 people and displaced 1.5 million.

“People are very tired of this tragic situation of the last three years. We don’t need or want this [war] and we want to solve this peacefully,” she said.

Russia is boycotting Eurovision after its entrant was barred from Ukraine for illegally entering annexed Crimea, and Moscow rejected offers to have her perform by video link or to send another contestant to Kiev.

“I hope when Eurovision begins we will have got past this [Russian] provocation and be able to concentrate on a celebration of music. We don’t need any other provocations,” Ruslana said, as Ukraine’s security forces deployed some 16,000 officers to Kiev to protect the contest and events for visitors around the city.

“This is extremely important for Ukraine,” Ruslana said during a break in rehearsals for her own performance in the interval of Saturday’s Eurovision final. “This is a good chance to show ourselves to the world. It will be the best of Ukraine.”