Boost for UUP as DUP stands aside in Fermanagh-South Tyrone 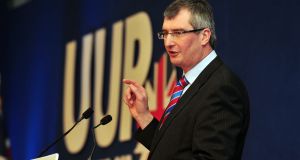 Tom Elliott: in 2015 when the DUP also stood aside, Mr Elliott took the seat from Michelle Gildernew by just over 500 votes. Photograph: Colm Lenaghan/Pacemaker

The DUP has decided not to run a candidate in the Westminster election in Fermanagh-South Tyrone, where the outgoing Ulster Unionist Party MP Tom Elliott is vulnerable to a challenge from Sinn Féin.

The DUP, in naming candidates who will contest 11 of Northern Ireland’s 18 constituencies, confirmed on Monday that it has “stood aside” in Fermanagh-South Tyrone.

This decision gives Mr Elliott a reasonable chance against the Sinn Féin candidate in the constituency, Michelle Gildernew.

The area will be one of the toughest battlegrounds in the election to be fought on June 8th. In 2015, former UUP leader Mr Elliott took the seat from Ms Gildernew by just over 500 votes, when the DUP also stood aside. In 2010, Ms Gildernew won the seat by four votes against independent unionist candidate Rodney Connor.

While there has been speculation of a DUP-UUP pact, the leaders of the respective parties, Arlene Foster and Robin Swann, have so far failed to agree any such voting accord.

All eight outgoing DUP MPs are standing again in the election. The party said that “further candidates will be ratified in the coming days”.

The DUP did not say who it will run in South Belfast, where outgoing SDLP MP Dr Alasdair McDonnell faces a tough contest from both the DUP and Alliance. Were the UUP to stand aside in South Belfast for a DUP candidate, such as former Assembly member Emma Pengelly, then Dr McDonnell could face a severe test to hold on to his seat.

DUP Assembly member Paul Girvan is running in South Antrim where the UUP candidate is outgoing MP Danny Kinahan. In 2015 Mr Kinahan took the seat from the Rev William McCrea of the DUP.

Belfast councillor Frank McCoubrey is standing for the DUP in West Belfast and DUP Assembly member Gary Middleton is running in Foyle.

“As a party we will be working to get the best deal for Northern Ireland as the United Kingdom leaves the EU,” she added.

“During the course of the campaign I will be taking the opportunity to outline the benefits of our United Kingdom. We support getting the Assembly and the Executive back functioning and local Ministers working on health, education and the issues that matter to people’s lives here,” said Ms Foster.