An ad campaign for the Australian Labor Party, featuring opposition leader Bill Shorten, that promotes protectionism has been heavily criticised on social media for featuring 12 workers all of whom are white except for one Asian woman. 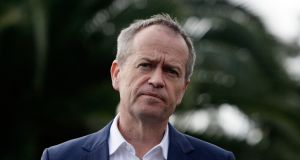 Australian Labor Party leader Bill Shorten: I’ve had a look at the final production and I think we should have had more diversity in it and I will be speaking to the Labor party about that.” Photograph: Lisa Maree Williams/Getty Images

Bill Shorten, the leader of Australia’s opposition Labor party, has conceded that people with more diverse backgrounds should have been in its new “Employ Australians First” ad, in response to complaints that it was racist.

The final image of the ad features Mr Shorten with a group of 12 workers, almost all of whom appear to be white.

The campaign has been savaged on social media as “racist” and an appeal to “nativism and xenophobia”.

Asked at a doorstop in Canberra on Monday to respond to the accusation the ad was racist or “includes too many white Australians”, Mr Shorten replied: “I think it’s rubbish.

“I’m not in the ad-making business. I make no apology for saying that there’s been 130,000 apprenticeships cut under the Liberals, that we’ve had too many rorts in our 457 visa system.

“I certainly think we need to encourage as much diversity as we can. I’ve had a look at the final production and I think we should have had more diversity in it and I will be speaking to the Labor party about that.”

Since the 2016 election Mr Shorten has taken an increasingly protectionist turn in his rhetoric, including suggesting that more than a million temporary work visa-holders in Australia are vulnerable to exploitation and taking jobs that could be filled by Australians.

Mr Shorten has said government reforms to the temporary work visa system are a “con job” that do not go far enough to protect Australian jobs.

Under Malcolm Turnbull the government has proposed new hurdles to Australian citizenship that the prime minister says will “put Australian values first”.

In a move likely to affect Irish workers in Australia, Mr Turnbull announced in April that the 457 visa for employer-sponsored skilled migrants will be scrapped and replaced by a temporary skills shortage visa, with a greatly reduced number of eligible occupations and other restrictions in place.

Responding to the changes in April, Mr Shorten said Labor would look at the detail but it was “reasonable” to require applicants for citizenship to pass an English-language test and to increase the waiting time before they can become citizens.