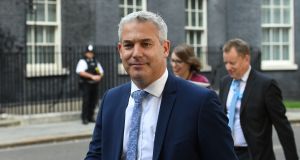 Stephen Barclay’s comments came as it was reported that his department’s working groups on alternative arrangements for the Border had concluded there were problems with all scenarios put forward to replace the backstop. Photograph: Stefan Rousseau/PA Wire

Britain’s Brexit secretary has accused the European Union of clinging to an “absolutist” policy on the Northern Ireland backstop that is increasing the risk that Britain will leave without a deal.

Stephen Barclay said that EU chief negotiator Michel Barnier was at odds with some European governments in insisting that Britain must ratify the withdrawal agreement before negotiating alternative arrangements to keep the Border open without the backstop.

“That is at odds with the position from a number of capitals that have said that they’re open to creative and flexible solutions and that they are keen to see the detail from the United Kingdom. Obviously if the test you set is an all-weather, 100 per cent, absolute guarantee, then the sort of detail that you then explore in terms of creating flexible arrangements will always fall short of that test,” Mr Barclay told The Irish Times.

“Either there is an appetite to look at creating more flexible solutions, in which case we stand ready to bring detail forward, or there is an all-weather, unchanged, absolutist approach, the consequence of which will be to in essence bring forward a risk in November.”

“We are looking for changes to the withdrawal agreement on the backstop specifically, which is distinct as you will be aware from the wider Northern Ireland protocol, which covers other issues such as the single electricity market, the benefits of North-South co-operation and the Common Travel Area. So the Northern Ireland protocol as a whole is not the same as the backstop which is around alignment,” he said.

Mr Barclay’s comments came as the Guardian reported that his department’s working groups on alternative arrangements for the Border had concluded that there were problems with all scenarios put forward to replace the backstop. The newspaper cited an official report on the findings of the working groups, which include independent experts from Northern Ireland and elsewhere.

“It is evident that every facilitation has concerns and issues related to them. The complexity of combining them into something more systemic and as part of one package is a key missing factor at present,” the report said.

“There were a number of concerns surrounding the deliverability of technological facilitations.”

The expert groups expressed concerns about a proposal to use an artificial intelligence option to detect disease and chemical contamination of food, which they thought could be ineffective. Onboard vehicle technology which could track the location, weight and temperature of goods was also considered risky if a lorry might suddenly be taken out of service and goods off-loaded into a non-registered vehicle.

Physical goods checks through mobile units could take weeks and involve lengthy periods of quarantine, the report found. The units could also be vulnerable to “targeting” and staff could be at risk, it said.

Smaller businesses in Northern Ireland could suffer through the additional administration required to send and receive goods across the Border, as well as other constraints and costs, the report found. They might also struggle with data collection or be unwilling to share information due to concerns around privacy.

“This is because they do not have the existing systems in place and are more likely to have non-standardised products and product ranges,” the report said.