Europe awaits move from London and rejects claim of progress 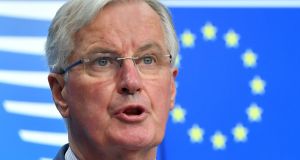 Chief EU negotiator for Brexit Michel Barnier: UK will find it difficult to come up with a formulation that will meet his red lines. Photograph: Emmanuel Dunand

Boris Johnson’s chief Brexit negotiator, David Frost, will be back in Brussels twice this week, on Wednesday and Friday, for what the European Commission describes as “technical discussions” on the EU-UK withdrawal agreement.

There is nothing of substance on the agenda, however, and no one is expecting “product”. All the real action is in London, and a commission spokeswoman again emphasised on Monday that it had yet to receive “concrete proposals” on alternative arrangements to the backstop. Such proposals are not now expected ahead of a UK election, seen as increasingly inevitable.

Talks, or discussions, but not negotiations, were ongoing but, as chief EU negotiator Michel Barnier emphasised in a weekend opinion article in the Sunday Telegraph, negotiations could start again only on the basis of new proposals from London that are “compatible with the withdrawal agreement”.

The commission, he wrote, “is ready to explore all avenues that the UK government may present and that are compatible with the withdrawal agreement”. The unchanged message, and particularly the EU’s unwavering line on the Irish backstop, echoed that brought around capitals last week to general agreement by Tánaiste Simon Coveney.

The suggestions from London that EU leaders, particularly German chancellor Angela Merkel and French president Emmanuel Macron, are ready to offer the UK an olive branch on the backstop are widely discounted in Brussels. The claims are seen as part of strategic blame game being played by a cynical prime minister.

There is strong speculation in Brussels that the UK is heading fast for a general election, probably to be called after defeat in the House of Commons this week, one engineered deliberately by Johnson to be fought on his own chosen ground.

Observers suggest that the British prime minister is reconciled to defeat this week and is determined to turn it to his advantage by painting himself as the most determined Brexiteer of them all, willing and eager to take the UK out of the EU immediately, but thwarted by Remainers in his own party as well as Labour and the Liberal Democrats.

The expectation among some observers in Brussels is that Johnson will use the election to argue that only a vote for the Conservatives will enable him to deliver Brexit and that support for the Brexit Party could stymie that prospect by threatening Tory seats – and that in any case the Brexit Party’s raison d’etre no longer exists.

In the aftermath of a general election victory Johnson, who would still like to avail of the two-year transition that a Brexit deal would allow for, might then submit proposals to the EU for an amended backstop.

But even without being unencumbered by the need to accommodate the DUP, upon which the Conservative party relies for its slim majority in the current parliament, Johnson will still find it difficult to come up with a formulation that will meet Barnier’s red lines. A no-deal would remain the most likely outcome – but Johnson would be firmly ensconced in No 10.