Berlin Zoo is celebrating the rare birth of twin panda cubs. China has long engaged in "panda diplomacy", dispatching the animals to zoos around the world as a symbol of close relations, however pandas born abroad must be returned to China. 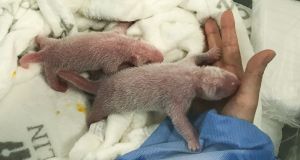 Germany is sliding towards recession, Angela Merkel’s political star is fading and US president Donald Trump has just announced a visit. In challenging times like this, there is only one antidote: baby animals.

And now Berlin zoo has delivered – or rather, its panda couple Meng Meng and Jiao Qing have: doubling Berlin’s panda population on Saturday with two pink baby cubs. The news surprised Berliners who found out only a week ago – in news confirmed by ultrasound images – that Meng Meng was already 140 days pregnant.

The newborns weigh 186 and 136 grams respectively but their sex has yet to be established. Videos show Meng Meng licking her blind bear cubs furiously as they emit shrieks that will soon lose their novelty with zoo neighbours.

The twin arrivals on – the first panda cubs born in Germany – are likely to eclipse the torrent of excitement in 2006 around baby polar bear Knut. On Monday the zoo issued a press release detailing the births in the style of Hello! magazine.

“Immediately after giving birth, the new mother knew just what to do: she placed the tiny creature gently on her belly and began to warm it lovingly with her big paws, warm breath, and the soft fur of her cheeks,” it noted. “But mother and child weren’t alone for long, as at 7.42pm – just under an hour later – a second cub was born!”

Proud foster father – Berlin zoo director Andrea Knieriem – says mother and cubs are in good health. “Even though these are the first offspring born to our young female panda, she is already doing a wonderful job as a mum,” he said.

Preparations for the big day resembled a royal birth, with Berlin keepers working hand in hand with Chinese experts from the Chengdu Research Base of Giant Panda Breeding. Though Meng Meng and Jiao Qing have been Berliners for two years, living in a custom-built pagoda enclosure with a bamboo flat-rate, they are a 15-year loan as part of Beijing panda diplomacy.

The young pandas are with their mother on alternating, two-to-three-hour shifts, and are otherwise kept in incubators. For now the new family is being kept out of public view but even before that changes, Berlin zoo is braced for a new bout of pandamonium.