Fintan O’Toole: Welcome to the United Kingdom of Absurdistan 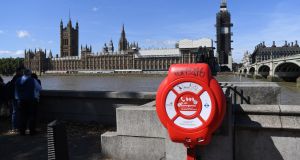 One thing that still unites the warring factions in England is the belief that Westminster is “the mother of all parliaments”. Photograph: Facundo Arrizabalaga

There are two things we know about revolutions. One is that they get more radical as they go along. The revolutionaries start out demanding specific reforms and end up imagining that they are inaugurating a whole new world. The other is that revolutions expose the great cracks in the ancien regime that should have been obvious all along. In retrospect, after the upheaval, it is clear that the old system was doomed by its own failure to manage necessary change.

Brexit is a very strange kind of revolution – the heroic overthrow of imaginary oppression, in which tragedy and farce are not sequential but simultaneous and deeply interwoven. But it is a revolution nonetheless, and it is conforming to these patterns. A goal that was unutterable in 2016 – the Year Zero of No Deal – is now mainstream policy. And the ancien regime of the Westminster system is having all its delusions mercilessly exposed by, of all places, Italy.

One thing that still unites the warring factions in England is the belief that Westminster is “the mother of all parliaments” and the envy of the democratic world. Well, it sure looks like the mother of all something right now, but it’s not parliamentary democracy. Consider what has happened. Boris Johnson was elected leader of the Tory party by 92,153 people. He was then appointed prime minister by a hereditary monarch with no parliamentary involvement whatsoever. Since July 24th, when he became prime minister, he has appeared just once in the House of Commons to answer questions. And he has now used those monarchical powers to prorogue parliament and make himself even more unaccountable to it. The one virtue of Johnson’s brazenness is that he has surely made obvious to his compatriots what outsiders can see – that the system in which all of this is possible is a democracy built around a solid core of feudalism.

To grasp the absurdity of this spectacle, we might turn to one of England’s great minds, Jonathan Sumption. He is simultaneously one of his country’s most distinguished lawyers, recently retired from the UK’s supreme court, and one of its leading historians, whose superb ongoing multivolume history of the Hundred Years War is much better than Game of Thrones. Last week, the London Times asked him to pronounce on the legality of Johnson’s prorogation of parliament. “I don’t think what the prime minister has said he is going to do is unlawful,” he said. But he added: “It might be considered unconstitutional in as much as it might be argued to be contrary to a longstanding convention of the constitution.”

So what Johnson is doing is probably unconstitutional but probably not unlawful. I don’t think most people in England have any idea how utterly nonsensical this seems to all the rest of us. It’s like saying that a man is almost certainly dead but nonetheless in quite good health. In any other democracy, if it’s unconstitutional, it’s unlawful. Only in the United Kingdom of Absurdistan can it possibly be otherwise. And the heart of the absurdity is that great tautology, the “unwritten constitution”.

The British constitution is so fine a thing that it would be positively insulting, even dangerous, to actually write it down. The people who need to know what it is are able to divine its mysteries – ordinary subjects are not among them. Johnson, for all his habitual mendacity, is exposing the truth that this arcane system of accretions and conventions is of little use when a shameless chancer is given the keys of the kingdom. His manoeuvre is not even a coup – when you can do all this lawfully, who needs coups?

Until very recently, most people in England would have pointed to Italy, with its infamous political instability, as the great counter-example that proved the wisdom of the British system. Last week, both countries were faced at the same time with a remarkably similar challenge: a radical right-wing opportunist seeking to bring down his own government and force a general election in which he would run not so much for parliament as against parliament. Matteo Salvini, leader of the prefascist League, has been governing in coalition with the populist Five Star movement. He tried to pull off pretty much the same trick as Johnson and for the same reason: to position himself as the voice of “the people” against the political “elites”.

How puny is Britain when it comes so badly out of a comparison with a country that is a byword for democratic fragility?

But Salvini was stopped – for two reasons. First, enough people within the political system were willing to stop fighting each other and start fighting the radical right. Second, Italy has a written democratic constitution with an elected president who could manage the process of creating an alternative government. The UK does not have the second of these things, and it is not at all clear that its parliamentarians can manage the first.

How weak does your constitution need to be when it can’t even stand up to a bluffer like Boris Johnson? How puny is it when it comes so badly out of a comparison with a country that is a byword for democratic fragility? It has come to something when an Italian might well look at the goings-on at the “mother of parliaments” and exclaim “Mamma mia!”