Exit polls put AfD finishing second with 27.5% in Saxony and 22.5% in Brandenburg 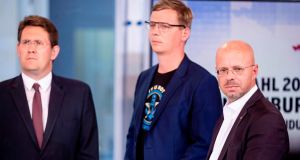 Germany’s far-right populist Alternative für Deutschland (AfD) party surged ahead in two regional elections on Sunday in eastern Germany, increasing political pressure on Berlin’s ruling grand coalition. The AfD finished in second place in Saxony and Brandenburg with 27.5 per cent and 22.5 per cent respectively, according to exit polls for ARD public television.

The ruling Christian Democratic Union (CDU) and Social Democratic Party (SPD) are likely to cling to power in Saxony and Brandenburg respectively, possibly with new coalitions, but only after drastic transfers of support to the populist far right. The results were motivated by local concerns – primarily about structural change and security concerns – but will raise questions about political fatigue with Berlin’s grand coalition of CDU and SPD, now in its third term since 2005.

It may also trigger discussion about a premature departure of Chancellor Angela Merkel from public life and the political credibility of her successor as CDU leader, Annegret Kramp-Karrenbauer. “The grand coalition parties have been punished and their style of dealing with the AfD – ignoring, then defaming us – no longer works,” said Dr Alice Weidel, AfD co-leader in the Bundestag. After surging to first place in polls in Saxony the AfD fell back on Sunday after a high turnout on election day, but it still gained nearly 18 per cent support on its last outing in 2014.

The CDU has ruled in Saxony since German unification in 1990 but, with 32 per cent on Sunday, scored its worst-ever result. After reactivating some 123,000 non-voters, the CDU but lost two-thirds of that number again to the AfD. “No one will argue that this result has a lot to do with Berlin,” said Michael Kretschmer, Saxon CDU leader and state premier, a dig at controversial campaign interventions from Berlin leaders. After the SPD collapsed to just 8 per cent in Saxony – the worst election result in its 150-year history – the local CDU may turn to a new coalition partner in the Greens. After the AfD, the Greens posted modest gains in traditionally challenging eastern German territory.

“The climate crisis has placed a huge role as well as social justice,” said Katrin Göring-Eckhardt, a senior eastern Green Party figure. “We have always said we are ready to take up responsibility [in Saxony] if things get serious.” The AfD was founded six years ago by economic liberal opponents to euro crisis bailouts but has since morphed into a populist, far-right anti-immigration party. As largest opposition party in the federal parliament, the Bundestag, the AfD enjoys 14-15 per cent in national polls.

Exit poll analysis in Saxony and Brandenburg showed 60 per cent voted for the AfD out of frustration with mainstream parties – and with the administration of Dr Merkel. She was absent in both state election campaigns, a reflection of lingering frustration with ongoing structural weaknesses in eastern Germany, three decades after German unification, and the aftermath of the 2015-2016 migration crisis.

Last week, a Syrian asylum seeker was jailed for involvement in the fatal stabbing of a local carpenter last year in Chemnitz, Saxon’s third-largest city, that sparked a far-right riot. Sunday’s latest election humiliation for the centre-left SPD will complicate its extended search for a new national leader and could boost demands by party leftists to collapse the grand coalition government in Berlin.

In the autumn would-be SPD leaders will tour the country with their plans to turn around the ailing party. “The AfD was able to stir up protest and collect the protest vote for itself,” said Manuela Schwesig, an acting SPD leader.