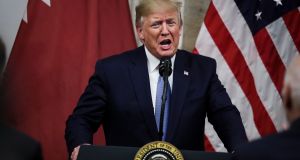 Donald Trump has dramatically stepped up the war of words over Britain’s US ambassador, branding him a ‘pompous fool’. Photograph:Oliver Contreras/EPA

United States president Donald Trump ratcheted up his attacks on the United Kingdom’s ambassador to the US on Tuesday, dismissing Sir Kim Darroch as a “pompous fool” and a “very stupid guy”.

In a series of tweets, Mr Trump repeated his damning assessment of the ambassador after disparaging descriptions of the US president by Mr Darroch were leaked to the Mail on Sunday. The president also disparaged UK prime minister Theresa May, describing her as “foolish” – a remarkable comment by a US president about a sitting British leader, albeit an outgoing one.

“The wacky Ambassador that the UK foisted upon the United States is not someone we are thrilled with, a very stupid guy. He should speak to his country, and Prime Minister May, about their failed Brexit negotiation, and not be upset with my criticism of how badly it was handled,” he said on Twitter.

He continued: “I told Theresa May how to do that deal, but she went her own foolish way – was unable to get it done. A disaster! I don’t know the Ambassador but have been told he is a pompous fool. Tell him the USA now has the best Economy & Military anywhere in the World, by far ... and they are both only getting bigger, better and stronger ... Thank you, Mr President!”

Mr Hunt tweeted that the US president’s comments were “disrespectful and wrong to our Prime Minister and my country”.

“Your diplomats give their private opinions to [US secretary of state Mike Pompeo] and so do ours! You said the UK/US alliance was the greatest in history and I agree ... but allies need to treat each other with respect as [Theresa May] has always done with you. Ambassadors are appointed by the UK government and if I become PM our Ambassador stays,” Mr Hunt wrote.

Mr Trump’s latest Twitter tirade came a day after he lashed out at Mr Darroch, one of the most experienced diplomats in the British foreign service, who has been ambassador to the US since 2016.

On Monday the president said he would no longer deal with the British ambassador. Hours later, Mr Darroch was not in attendance as expected at a dinner with the Emir of Qatar hosted by US treasury secretary Steve Mnuchin. He also did not attend a scheduled meeting with British trade secretary Liam Fox and Ivanka Trump on Tuesday, though it was reported it was his decision not to participate.

Earlier on Tuesday, Downing Street said that Mr Darroch continued to have the government’s “full support”.

“While the views expressed in the [leaked] documents ... are not necessarily the views of ministers or the government it is hugely important that ambassadors are able to provide honest, unvarnished assessments of the politics in their country,” a spokesman for Mrs May said.

Mr Darroch, who is 65, is scheduled to remain in Washington until the end of the year.

Mr Trump’s criticism of Mrs May’s handling of Brexit is not the first comment by the US president on the UK’s decision to leave the European Union. But Mrs May was one of the first foreign leaders to visit Mr Trump after his inauguration as US president, in a sign that her government was eager to cement the ties between the US and UK.

The escalating tensions between the two countries come weeks after Mrs May hosted Mr Trump for a state visit in Britain.

In a tweet on Monday, Mr Trump said he was most impressed with the queen during the “magnificent” state visit last month.