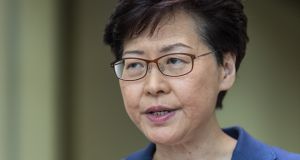 Hong Kong leader Carrie Lam said on Tuesday the extradition bill that sparked the city’s biggest political crisis in decades was dead and the government’s work on the bill a “total failure”.Photographer: Justin Chin/Bloomberg

Protesters in Hong Kong vowed to escalate their efforts on Tuesday after the city’s leader said the controversial extradition Bill was “dead” and her government’s efforts were “a complete failure”, but she continued to reject a raft of key student demands.

At her first public appearance since a pre-dawn press conference after protesters had stormed the legislature a week ago, chief executive Carrie Lam refused to step down but admitted there were “still lingering doubts as to the government’s sincerity”.

“The Bill is dead,” she said. “Our work on the extradition Bill amendment is a complete failure.”

While the Bill was suspended some weeks ago, on Tuesday she refused to say it was “withdrawn” as protesters have repeatedly demanded, and she has not invoked procedures to formally terminate it.

She also refused to order an independent inquiry into police brutality or offer amnesties to students arrested during the protests, and said she would meet student leaders only if there were no preconditions attached to the talks.

Pro-democracy lawmaker Claudia Mo said the chief executive was being condescending to the people of Hong Kong.

“She thinks she can play with words and things will just die down,” she said.

A student who has participated in all the marches said the chief executive was “playing word games” and “insulting the students”.

“Does she think suspending the Bill is the same as cancelling it,” asked Kevin Mok (22). “She makes a big fuss about holding a press conference to appear she is giving us something, but behind all the apologies all we hear is rejection after rejection.”

Student leaders said they would be arranging more mass rallies and introducing a range of new protest tactics to show their outrage at the government.

“[Mrs] Lam doesn’t seem to realise, these shows of insincerity are counterproductive,” Mr Mok told The Irish Times. “It just encourages us to protest more.”

Despite repeated calls the embattled leader said she had no plans to resign, and asked for an opportunity to win back public trust.

“Stepping down is not an easy thing. I still have the enthusiasm and responsibility to serve the public,” Ms Lam said. “My sincere plea is: Please give us an opportunity, the time, the room, to take Hong Kong out of the current impasse and try to improve the current situation.”

Despite her mishandling of the crisis, China would not want Ms Lam to resign at this point, according to Ben Bland, author of Generation HK: Seeking Identity in China’s Shadow.

“Beijing is unlikely to intervene openly, for now, as it is quite convenient for Carrie Lam and her government to act as a ‘sponge’ absorbing criticism,” he told The Irish Times.

At the press conference on Tuesday Ms Lam also dismissed a call to drop all prosecutions against protesters who have been arrested or charged.

“Any demand that we should grant an amnesty at this stage, in other words we will not follow up on investigations and prosecutions of the offenders, is not acceptable,” Ms Lam said. “Because that bluntly goes against the rule of law in Hong Kong.”

She also refused to order an independent commission of inquiry into allegations of police brutality and excessive force, saying the Independent Police Complaints Council had launched a study and would report back within six months.

Amnesty International’s Man-kei Tam said the council was a “a tiger without teeth” that had limited power, cannot summon witnesses and was not independent as it is made up primarily of pro-government figures. They and the students are calling for a full independent inquiry chaired by a judge.

The chief executive admitted that “deep contradictions” remained in Hong Kong since the 2014 pro-democracy Umbrella Movement, which had not been resolved.

“This time, I do not think we can continue to ignore those fundamental and deep-seated problems in Hong Kong society,” she said. “I hope together with Hong Kong community, we can go deep into those issues.”

She said she was “willing to engage in an open dialogue with students without any preconditions”.

Last week student leaders rejected her request for a small-scale, closed-door meeting, saying they would only meet if she agreed to a town hall-style open meeting and promise to exonerate protesters.

“What is the point of meeting though?” Mr Mok asked. “She has already made clear she totally rejects our core demands.”

He also pointed out that four of the five student leaders who met to negotiate with Ms Lam during the Umbrella Movement were later prosecuted for their roles in the protests.

“Obviously, there is zero trust,” he said.

A movement that started as a call for the spiking of a Bill that would allow extradition to China has morphed into a demand for wider democracy, putting the protesters on a collision course with Chinese president Xi Jinping, whose government has shown increasing authoritarian tendencies over the past seven years.

Beijing will want the Hong Kong government “to continue the sustained campaign against dissent and opposition parties in which it has engaged in recent years”, according to Antony Dapiran, a Hong Kong-based writer and lawyer, and the author of the book City of Protest: A Recent History of Dissent in Hong Kong.

“In particular, expect this to be done through the use of the Hong Kong legal system, such as aggressively prosecuting and jailing protest leaders, disqualifying candidates from office, and silencing and intimidating opposition parties,” he told The Irish Times.

Mr Bland said Beijing would be increasingly concerned about the deepening resistance in Hong Kong and the growth of a separate identity among many young Hong Kongers, who are rejecting their place within the People’s Republic of China.

“From Beijing’s perspective, this separatism makes Hong Kong a national security issue, alongside Taiwan, Tibet and Xinjiang, ” he said. “Ultimately, the Hong Kong government, supported by Beijing, is likely to increase its efforts to curb the avenues for opposition and increase the costs of resistance.”