Trump to halt dealings with British ambassador over criticism 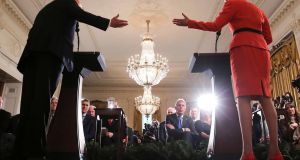 Britain’s ambassador to the United States Kim Darroch (centre) listens as US President Donald Trump and British prime minister Theresa May hold a joint news conference at the White House in Washington, US in January, 2017. Photograph: Reuters/Carlos Barria

Donald Trump has said his administration will no longer deal with Britain’s ambassador to Washington following the leak of diplomatic messages critical of the president.

In a Twitter post on Monday night, Mr Trump also criticised Theresa May and said he was looking forward to Britain having a new prime minister.

“I have been very critical about the way the UK and prime minister Theresa May handled Brexit. What a mess she and her representatives have created. I told her how it should be done, but she decided to go another way,” he said.

“I do not know the ambassador, but he is not liked or well-thought of within the US. We will no longer deal with him. The good news for the wonderful United Kingdom is that they will soon have a new prime minister. While I thoroughly enjoyed the magnificent state visit last month, it was the queen who I was most impressed with!”

The British government has admitted that it does not yet know the extent of the leak of diplomatic cables from ambassador Kim Darroch. The Mail on Sunday published excerpts from his reports that described Mr Trump as insecure and his White House as “uniquely dysfunctional”, warning that the administration could collapse in disgrace.

The government has launched an investigation into the leak but foreign office minister Alan Duncan told MPs that he did not know if further messages had been leaked but not yet published.

“In terms of the emails that have been leaked, they are two years apart – one cluster very recent and one of two years ago,” he said.

“So it is not quite right to say they have been leaked consistently throughout that period. But of course we don’t know if there are any others in the wrong hands which might subsequently be leaked.”

The cables, confidential reports from the ambassador, were distributed widely throughout the British government system and Sir Alan said there would have been at least 100 recipients.

Tom Tugendhat, the Conservative chairman of the foreign affairs committee, said he was concerned a “culture of leaks” was developing within the government. He warned it would damage Britain’s reputation and undermine relationships with allies and said he had asked the Metropolitan Police to investigate.

“I have asked the foreign secretary today for details of the leak inquiry, who commissioned it, who will it report to, will it be published, will serving ministers and officials and their predecessors be compelled to participate, what happens if they do not?” he said.

“However, this leak is not just a problem for the foreign office but one that effects the entire government. I have heard today already of senior serving military officers who are increasingly concerned that reports they write, may also not be kept secret.”

Although ministers expressed confidence in Sir Kim, who moved to Washington in January 2016 for a posting that would usually last between three and five years, foreign secretary Jeremy Hunt said the ambassador’s views were not those of the government. Mr Hunt said it was important that ambassadors should feel free to express their views frankly but added that he did not agree with Sir Kim’s assessment of the Trump administration.

“I don’t agree with some of the views that we saw in those letters. I’ve said I think the US administration is highly effective and we have the warmest of relationships, and a partnership based on standing up for shared values,” he said.