Corbyn says Labour would back remain in Brexit referendum 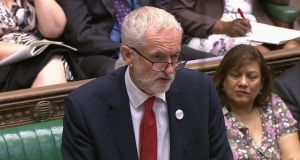 Jeremy Corbyn has said the Labour Party will challenge whoever is the next Tory leader to put their Brexit deal to the public in a second referendum. Photograph: House of Commons/PA Wire

Jeremy Corbyn has sought to draw a line under Labour’s Brexit travails by announcing a “settled” policy of backing remain in any referendum called on a Conservative deal.

The British Labour leader has been under intense pressure to shift to an overtly anti-Brexit stance, but has insisted on consulting the party’s stakeholders in recent weeks, including the trade unions.

In a statement emailed to party members on Tuesday he made no reference to what stance Labour would take in the event of a general election in the near future, or whether Labour could enter such a contest saying it would still go ahead with leaving the European Union.

But he made clear that if a referendum was called on the Brexit deal negotiated by the incoming Tory prime minister – or on whether to go ahead with a no-deal Brexit – Labour would support remain.

Mr Corbyn wrote: “Whoever becomes the new prime minister should have the confidence to put their deal, or no deal, back to the people in a public vote.

“In those circumstances, I want to make it clear that Labour would campaign for remain against either no deal or a Tory deal that does not protect the economy and jobs.”

British trade unions published a statement on Monday that suggested Labour should seek to negotiate its own, better Brexit deal and then put that to the people; but declined to specify how the party would campaign in the event of that happening.

Mr Corbyn acknowledged the issue of Brexit had “been divisive in our communities and sometimes in our party too”. He defended Labour’s position over the past three years, saying it had been right to respect the result of the 2016 referendum.

With Labour under intense pressure from more overtly pro-remain parties, including the Liberal Democrats, the party had already shifted since the European elections towards urging the Conservatives to put their deal to a public vote. But Mr Corbyn had previously stopped short of saying Labour would campaign for remain in the event of a referendum being called.

Differences in the shadow cabinet over Brexit policy have repeatedly been played out in public in recent months, with the shadow chancellor, John McDonnell, joining calls for his party to adopt a remain stance.

The shadow foreign secretary, Emily Thornberry, was dropped from deputising for Mr Corbyn at prime minister’s questions after criticising the party’s position during TV coverage of the European election results. “We were not clear on the one single thing that people wanted to hear,” she said.

Mr Corbyn’s deputy, Tom Watson, has publicly urged party members to make their disquiet about Labour’s position known, by signing up to a remain “declaration”.

But fellow shadow cabinet members Jon Trickett and Ian Lavery have repeatedly expressed concerns about the idea of supporting remain in a referendum, fearing it will undermine Labour’s support in leave-voting constituencies at the next general election. – Guardian