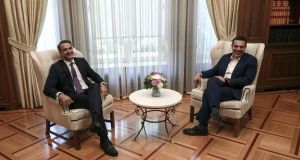 In a changing of the guard that was as subdued as it was swift, Mr Mitsotakis assumed office after he was officially sworn in by the Orthodox country’s spiritual leader, Archbishop Ieronymos.

From the outset there was no escaping the change in style. In a radical departure from his leftist predecessor, a self-declared atheist only ever seen in open-neck shirts, Mr Mitsotakis wore a suit and tie as he took the oath on the Bible, watched by his wife and three children.

“We have been given a strong mandate to change Greece, ” said the 51-year-old in his first statement as premier after his investiture. “The hard work begins today. I have absolute confidence in our abilities to rise to the occasion.”

The change not only marked the conservatives’ return to power but also the start of a new era: after a drama-filled decade of deep recession, multiple international bailouts, unprecedented poverty and protest, debt-stricken Greece had come full circle, electing its first post-bailout government.

In a nation worn out by years of EU-mandated austerity – the price of remaining in the euro zone – Mr Mitsotakis’s promise of re-energising the economy by reducing taxes, luring foreign investment and creating jobs resonated.

With all votes counted on Monday, New Democracy was shown to have captured 39.8 per cent and 158 seats, more than doubling its presence in the 300-seat parliament. Mr Tsipras’s Syriza party came in with 31.5 per cent.

Furnished with an absolute majority, the Harvard-educated leader, the son of a former conservative premier, will be able to form a government unfettered.

Technocrats and business managers as well as people with centre-left backgrounds are expected to join the ranks of the new cabinet, to be announced on Monday. Insiders say the new leader’s overarching aim will be to unify an often fractious nation behind a reform plan that will spur economic growth.

“I don’t think there has been a prime minister who has been more prepared for this job,” said one. “He knows what he is up against, he has a plan and he is going to act on it.”

Congratulatory messages poured in for a leader viewed internationally as a reformist who supporters say is the man to modernise Greece. Despite Mr Tsipras’s promises of relief measures including a bonus for pensioners and wage increases, Mr Mitsotakis resolutely refused to make pre-election promises he said he would be unable to keep – even if his party’s pledge to reduce VAT and corporate and property taxes is likely to engender disapproval among foreign creditors who have continued to monitor Greece since it exited its third economic adjustment programme last August.

In a previous guise the politician was minister of administrative reform, making changes to the public sector that while controversial were widely respected by foreign lenders.

Although New Democracy has traditionally espoused socially conservative views, as one of Europe’s most nationalist rightwing parties, Mr Mitsotakis has been at pains to move it to the centre. Privately he describes himself as a progressive with liberal economic views.

The party’s victory has been seen as personal vindication. As a modernising centrist the ex-financier was held in suspicion by leading New Democracy figures when he assumed its helm in January 2016. – Guardian