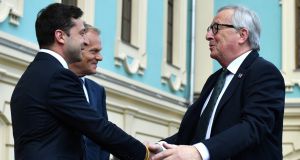 The Kremlin said it would consider Mr Zelenskiy’s suggestion, which came amid protests in Kiev against a proposed live discussion linking Russian state television with a Ukrainian channel that has ties to Mr Putin’s close friend, Viktor Medvedchuk.

Critics said the show, We Need to Talk, would be a propaganda exercise for Kremlin-friendly parties ahead of Ukraine’s July 21st parliamentary elections. The Ukrainian station, NewsOne, subsequently said it was scrapping the idea over security fears and amid threats of legal action from the Kiev authorities.

Mr Zelenskiy dismissed the proposed talk show as “a cheap but dangerous PR stunt ahead of the elections intended once again to divide us, Ukrainians, into two camps”, before switching to Russian to send a message to Mr Putin.

“I suggest the following company for our conversation: You and I, US president Donald Trump, British prime minister Theresa May, German chancellor Angela Merkel, French president Emmanuel Macron,” he continued.

“The venue? I think [Belarusian president] Alexander Lukashenko would be glad to welcome us in Minsk. We are not changing or rejecting any diplomatic formats. We suggest that we talk. We do need to talk, right?”

The so-called Minsk agreements, signed in the city in 2015, calmed fighting in eastern Ukraine between government troops and Russian-led separatists but failed to end daily shelling and skirmishes.

The so-called Normandy format peace talks involving Ukraine, Russia, Germany and France have not made significant progress towards ending a five-year war that has killed more than 13,000 people, displaced some 1.6 million and badly hurt Ukraine’s economy.

“This is a new initiative. Of course, it will be considered, but I cannot give any reaction,” Kremlin spokesman Dmitry Peskov said of Mr Zelenskiy’s idea.

Mr Zelenskiy reaffirmed his country’s commitment to reforms, fighting corruption and integration with the West as he hosted his first EU-Ukraine summit since taking power in May.

“Only a few days ago, the EU unanimously extended the economic sanctions against Russia for another six months. The sanctions will remain in place until the Minsk agreements are fully implemented,” said Donald Tusk, president of the European Council.

The EU committed €119 million in new assistance for Ukraine and reiterated that a further €500 million would be disbursed once relevant reforms were in place.

As he prepares to leave his post, Mr Tusk said: “There are some in Brussels who branded me a pro-Ukraine maniac. They often said it right to my face. To be honest, I’m very proud of that epithet. You will always be able to count on me.”