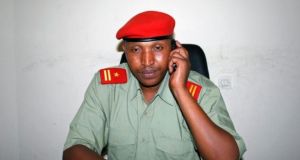 Bosco Ntaganda, who maintained his innocence during his trial, faces a maximum life sentence following his convictions at the global court in The Hague File Photograph: Paul Herera/Reuters

In total, 2,123 victims were involved in the trial, with some travelling to The Hague to give evidence, and others meeting ICC investigators in eastern Democratic Republic of the Congo.

Ntaganda was convicted on Monday. His sentencing hearing will be in a few weeks, and he is expected to appeal the ruling.

His case centred on 2002 and 2003, when the 45-year-old former militia leader ordered the massacre of civilians in Ituri Province, including slaughter at a village where children were among the victims.

Ntaganda, a former child soldier himself, appealed to judges by saying was a “soldier not a criminal”. His lawyers argued that he was a victim himself.

He is only the fourth person to be convicted by the ICC since it was set up in 2002.

“We are happy that he’s been convicted,” said Jean-Mobert Senga, Amnesty International’s DRC researcher, in a phone interview.

“Ntaganda is one of the most prominent war criminals in that region. He was very feared by many people, including government officials,” Senga said.

For seven years Ntaganda lived in Goma, a border city close to Rwanda, after he had been indicted by the ICC, because people were too frightened to go near him, Amnesty said. For some of this time, he was a general in the Congolese national army.

In 2013, Ntaganda voluntarily surrendered to the ICC – the first person ever to do so. It is thought he was worried about being assassinated.

“He was named as ‘Terminator’, so this ruling is huge because it sends a real signal to other criminals that nobody is powerful enough to escape justice indefinitely,” said Senga. “Their powers and influence will not last forever.”

“Some victims have died, others are completely desperate but now they can feel that however long it takes justice can still be done.”

Senga added that it was “a bit of a disappointment” the former warlord couldn’t have been tried in eastern DRC, but it hadn’t been possible for security reasons, as well as financial and political considerations by the ICC.

The ICC instead broadcast some parts of the trial on video for communities in Ituri province.

Monitoring groups say more than 60,000 people have been killed in eastern DRC since 1999, when violence broke out between militias competing for resources.

“There is still a long way to go for justice for crimes committed in eastern DRC and in DRC in general,” said Senga. “The crimes that have been committed in DRC over the 25 last years are huge and many criminals are still free, some still hold power in the army or the government.”