Despite big lead, Tories have ground to make up in highly unpredictable circumstances 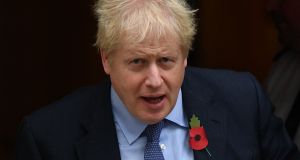 Britain’s prime minister Boris Johnson: “If the Tories don’t get an overall majority, the opposition will gang up against him to kick him out,” says polling expert John Curtice. Photograph: Daniel Leal-Olivas/AFP via Getty Images

Two-and-a-half years after Theresa May’s risky decision to call a snap election that lost the Conservatives their majority, her successor Boris Johnson finds himself in a strikingly similar position.

An analysis by the Financial Times of the opinion polls suggests Johnson’s party is facing an electoral landscape hardly changed since the 2017 election was called. Labour was polling on 25 per cent on Tuesday, exactly the same level as when May called her snap vote.

Worryingly for Johnson, however, the Conservatives are significantly further behind than at the start of the last campaign. Whereas the Tories were polling 44 per cent on the day the previous election was called, they are currently projected to garner 36 per cent share of the vote.

The political circumstances mirror those of May, who was seeking to win a majority to secure a Brexit deal; Johnson is doing so to achieve the same goal.

Johnson’s push for a vote before Christmas was in part motivated by his party’s healthy lead in polls, which has grown steadily since he became prime minister in July. Last week, one pollster had the Tories as much as 16 points ahead of Jeremy Corbyn’s Labour.

But polling experts have warned that the December 12th election will be even more unpredictable and difficult to anticipate than the last. The British Election Survey noted earlier this month that there was an “unprecedented” level of voter churn between the parties and allegiances were shifting as the electorate orientates down Remain/Leave lines.

John Curtice, the UK’s leading pollster, said that Johnson’s hopes of victory would depend on how well the Brexit party does. The better Nigel Farage’s party polls, the more votes they will take off the Tories and risk letting in Labour.

“Back in 2017, Theresa May expanded her lead by squeezing the Ukip vote. Boris Johnson has managed to do the same for the Brexit party, but the question is whether he can sustain that during the campaign.”

Curtice agreed that the election was a gamble for Johnson, because the Labour party would not have to make much progress in the campaign to take seats from the Tories and keep Johnson out of Downing Street.

“The Conservative party lead doesn’t have to go down much at all to put us into hung parliament territory. Boris Johnson either wins, or he doesn’t. That’s all that matters. If the Tories don’t get an overall majority, the opposition will gang up against him to kick him out. He can’t afford to just win 318 seats again,” he said.

Much like the 2017 election, how each party performs during the campaign may be more crucial than the polling fundamentals in deciding who triumphs. Labour gained 11 points during the last election campaign and, if the same feat were to be repeated in 2019, the Tories would be out of office.

Joe Twyman, director of pollster Deltapoll, said that in “normal times” the Tories should be on course to win a comfortable majority based on their current vote share and lead over Labour.

“But the shadow of Brexit is long. The Tories have to perform well in individual target seats, not just nationally. The Conservatives are hoping to convince their Remain-leaning supporters that Jeremy Corbyn is a greater threat than Brexit, while also convincing Leave voters that a Remain parliament is the bigger threat.”

“Essentially, this election will come down to what triumphs: party loyalty or Brexit loyalty. ‘It seems to me that the Conservatives are going to try and conduct a national campaign on both fronts. At the last election, voters snapped back to party loyalties on polling day. Whether they do so again will decide whether Boris Johnson can win.” – Copyright The Financial Times Limited 2019