What the British papers say about the December 12th election 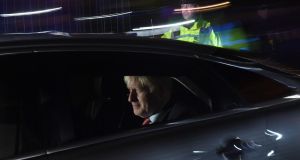 Brexmas, Brelection, call it what you will, Wednesday’s papers all look ahead to a festive snap election with turkeys, a Grinch and even a New Year’s Leave party. Also, please note that, although I will not be referring to who won the Great British Bake Off final, you will unavoidably get an idea if you look at the front pages below.

The Guardian carries a large picture of a packed Commons and casts the election vote in terms of Brexit. The headline is “Parliament breaks deadlock with December 12th election.” It notes that the national poll could be the most unpredictable in a generation and that nearly half of Labour MPs either abstained or were absent for the vote.

Metro goes with a cheery “Jingle polls!” for its headline and says it is the first December election in almost a century.

The Daily Mail strikes a more sinister tone, with a cartoon Boris Johnson dressed as Santa and a green-skinned Jeremy Corbyn riding a sleigh. The paper focuses on the threat the Brexit party and the Lib Dems pose to the Tory vote, with the headline: “Don’t let the Grinch steal your Christmas.” But the copy is more upbeat, reporting that Johnson has promised voters a new Parliament for Christmas after dithering by opposition parties.

The Daily Mirror says “It’s time to stuff the turkey”, and superimposes the head of the PM on the animal. It says voters will “get the chance to axe reckless Boris Johnson” after MPs agreed a December 12th vote.

The Daily Telegraph chooses a picture in which Corbyn and his shadow cabinet resemble Christmas carollers, above the simple headline: “Christmas election.” Columnist Sherelle Jacobs says it’s payback time for a pathetic Parliament, while the Matt cartoon suggests the election will put paid to the season of goodwill.

The Sun skips Christmas and heads straight for “New Year’s Leave” and says Johnson now has the chance to secure a mandate to get a Brexit deal done before the end of 2019. It pitches 1 January as “the first day of the rest of our lives”.

The Express chooses a Churchillian picture of Johnson and predicts in its headline that December 12th will be the day “when Britain will vote … once and for all ... to deliver Brexit.” It says the move came after Corbyn “caved in and dropped his resistance”.

The Times is less confident of the outcome, saying the prime minister has gambled on voters backing him to secure Brexit. It says he justified the decision by saying further Brexit delays were “seriously damaging the national interest”.

The FT casts the election as a way to break the paralysis over Brexit and refers in its headline to Johnson’s overtures to the Tory MPs who had the whip withdrawn last month for disobeying him. “MPs back December 12 election as Johnson recalls exiled rebels.”

The i begins its election countdown timer – 43 days – and carries front page links to two opinion pieces saying the vote will be harder to predict than ever, and that the race will be won and lost on social media.