A video filmed by Pastor Connie Benton-Lucas in Castaic, California shows the devastation left inside a house by the Tick Fire, one of the severe blazes that rocked the entire US state in recent days. Video: River Bottom Christian Outreach 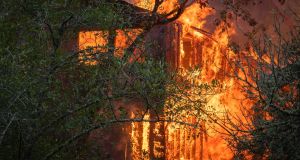 A building burns off Highway 128 during the Kincade Fire in Sonoma County, California on Tuesday. Wildfires have forced hundreds of thousands of people from their homes across the state and more than 100,000 buildings are at risk. Photograph: Sarahbeth Maney/Bloomberg

Electrical equipment led to a fatal wildfire which swept through Southern California last year and another currently burning near Los Angeles, utilities companies have said.

Thousands of people have been forced to flee their homes in the hills of LA after the latest blaze.

The fire that broke out on Monday morning near the J Paul Getty Museum was sparked after high winds blew a eucalyptus branch onto an electric line that caused it to bend, ignite dry grass and destroy a dozen homes, according to preliminary findings.

Meanwhile, Southern California (SoCal) Edison announced that it believes its equipment caused the deadly Woolsey fire last year northwest of Los Angeles that scorched dry grasslands and burned across the Santa Monica Mountains all the way to the coast.

The Ventura County Fire Department found that SoCal Edison equipment ignited the November fire, which led to homes being burned down in Thousand Oaks, Calabasas and Malibu.

SoCal Edison said the fire department had not yet released those findings, but the utility company conceded in a quarterly earnings report that its equipment was the likely source.

Last year, the company told the state Public Utilities Commission only that its equipment might have caused a power outage before the blaze started.

While lawsuits from victims’ families had blamed the utility company, the cause is officially still under investigation by SoCal Edison, Cal Fire and the Ventura County Fire Department.

Power lines have been blamed on many of the state’s worst fires in recent years, prompting an unprecedented response this autumn to cut off power amid dry, gusty conditions.

The move followed several deadly wildfires, including one that killed 85 and destroyed the town of Paradise and plunged the company into bankruptcy.

Despite recent outages, PG&E’s power lines may have started two smaller fires over the weekend in the San Francisco Bay Area and a massive blaze still burning in Sonoma County wine country, the utility company said.

The Los Angeles fire that broke out along Interstate 405 in the middle of the night Monday was in an area where the Los Angeles Department of Water and Power utility company said it trimmed vegetation this summer.

The branch of the eucalyptus, which is a notoriously flammable tree, blew about 30 feet (nine metres) onto the power line, the utility said.

About 9,000 people, including actor Arnold Schwarzenegger and basketball player LeBron James, remained under evacuation orders as firefighters warned that hot Santa Ana winds were expected to return and continue into Thursday.–PA