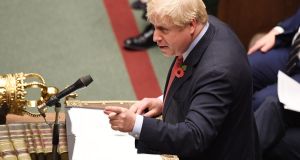 The Conservatives start the campaign with a double-digit poll lead over Labour but Jeremy Corbyn promised to conduct an ambitious campaign for radical change. Photograph: Jessica Taylor/AFP via Getty

The UK faces a general election on December 12th that will determine the future of Brexit and could set the country on a radical new economic course. After MPs voted by 438 to 20 to trigger the election, Boris Johnson said it was time for the UK to come together to get things done.

“It’s going to be a tough election but we will do the best we can,” he said.

Tuesday night’s vote was the prime minister’s fourth attempt to secure an early general election and it won the backing of Labour, the Scottish National Party, the Liberal Democrats and the Democratic Unionist Party. The opposition parties agreed to the election only after Mr Johnson secured a three-month delay to Brexit and withdrew his withdrawal agreement Bill.

Parliament will be dissolved just after midnight next Tuesday night, 25 working days before the date of the UK’s first December general election for almost a century.

The Conservatives start the campaign with a double-digit poll lead over Labour but Jeremy Corbyn promised to conduct an ambitious campaign for radical change.

“This election is a once-in-a-generation chance to transform our country and take on the vested interests holding people back,” he said.

“The choice at this election could not be clearer: a Labour government will be on your side; while Boris Johnson’s Conservatives, who think they’re born to rule, will only look after the privileged few.”

Labour’s policies are expected to include a plan for big companies to transfer 10 per cent of their shares to employees over 10 years and for tenants in private rental accommodation to be able to buy their homes at a favourable price.

Mr Johnson told MPs he would campaign to take the UK out of the EU with the deal he negotiated earlier this month. The Conservatives are targeting dozens of Labour-held seats that voted Leave in 2016 and the party is promising big spending increases for police, hospitals and schools.

The party on Tuesday readmitted 10 of the 21 rebel MPs expelled for backing a Bill aimed at blocking a no-deal Brexit. But former chancellors of the exchequer Ken Clarke and Philip Hammond and former justice secretary David Gauke have not had the whip restored.

DUP leader Arlene Foster welcomed the general election, saying her party would use it to send a message that Northern Ireland should not be separated economically from the rest of the United Kingdom after Brexit.

“At a time of great uncertainty as to who will form the next government, how Northern Ireland votes will matter as never before. Unionists need their strongest team returned so that Northern Ireland’s interests are protected in the next parliament,” she said.