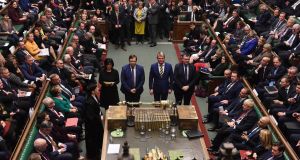 MPs vote in favour of the Creasy amendment to the early election Bill in the House of Commons in London. Photograph: Jessica Taylor/UK Parliament handout

Jeremy Corbyn has promised that Labour will conduct an “ambitious, radical campaign for real change” ahead of December’s general election. Speaking at the start of a debate to authorise an election on December 12th, Mr Corbyn said the European Union’s confirmation of a three-month delay to Brexit meant his party could support an early election.

A number of Labour MPs spoke out against an early election, however, with North Durham’s Kevan Jones saying parliament should instead seek to overcome the impasse over Brexit and scrutinise prime minister Boris Johnson’s Withdrawal Agreement Bill.

While MPs were debating the early election Bill, the government threatened to withdraw it if amendments calling for EU citizens or 16- and 17-year-olds to be allowed to vote in the election. Deputy speaker Lindsay Hoyle did not select any such amendments and MPs rejected the only amendment they voted on, which would have changed the date of the election from December 12th to December 9th, by 315 votes to 295.

Parliament must be dissolved 25 working days ahead of the election, so this parliament will end just after midnight next Tuesday night. The government’s business managers are confident that this timetable will give them enough time to complete the passage of the early election Bill and to pass a Northern Ireland budget Bill to maintain funding for the civil service in the North.

Independent unionist Sylvia Hermon and Labour’s Kate Hoey called on the government to provide time to pass legislation to compensate the victims in Northern Ireland of appalling historical institutional abuse, which has already started in the House of Lords.

The government on Tuesday restored the Conservative whip to 10 of the 21 MPs who were expelled for supporting legislation to block a no-deal Brexit. Alistair Burt, Caroline Nokes, Greg Clark, Sir Nicholas Soames, Ed Vaizey, Margot James, Richard Benyon, Stephen Hammond, Steve Brine, and Richard Harrington are now eligible to stand as Conservative candidates at the election but some have indicated they will not do so.

Those who did not have the whip restored included former chancellors of the exchequer Ken Clarke and Philip Hammond and former justice secretary David Gauke. The Liberal Democrats said on Tuesday that former Conservative minister Sam Gyimah, who defected to the party last month, will be its candidate in the marginal London seat of Kensington.