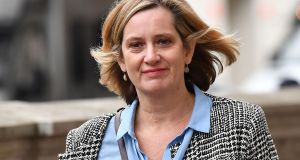 Amber Rudd, the former UK home secretary and work and pensions secretary who was once tipped as a future Conservative leader, is to quit as an MP at the coming election, she has said.

Announcing the news to the Evening Standard, Ms Rudd said: “I’m not finished with politics, I’m just not standing at this election.”

Ms Rudd quit the cabinet and gave up the Conservative whip in September over what she said at the time was Boris Johnson’s seeming unwillingness to work for a Brexit deal. However, since then she has sought to return as a Tory.

On Tuesday, 10 of 21 other Conservative MPs who were stripped of the whip for supporting a backbench-instigated Bill seeking to block a no-deal Brexit were readmitted to the party.

Ms Rudd said she planned to meet the Conservative chief whip, Mark Spencer, to formally seek a return: “I’m happy to leave the House of Commons as a Conservative MP.”

However, the party has indicated that Ms Rudd, who has a majority of only 346 in her Hastings and Rye constituency, might not be welcomed back.

Asked if she had any regrets, Ms Rudd said: “I felt I made the right steps at those critical points and I am pleased that the prime minister has now restored the whip to some of those colleagues.” She did not rule out a return to Westminster in the future, but said there were “many other things I want to do”.

David Lidington to step down

David Lidington, a former de-facto deputy to former prime minister Theresa May, has also announced he will not stand at the next general election, citing the “heavy cost” of politics on family life in a letter to The Bucks Herald. Mr Lidington said: “After a great deal of thought I have decided not to seek re-election at the forthcoming General Election. Politics imposes a heavy cost on family and private life.

“That is not a complaint: people who seek elected office do so voluntarily. But I have come to the conclusion that now is the right time for me to give a higher priority in terms of my time and energy, to Helen and my family who have given unstinting support to me during more than a quarter of a century in the House of Commons.”–Guardian and PA