An inquiry into London's Grenfell Tower disaster has found that among the 71 people killed in the blaze, some could have been saved if not for mistakes made by the city's fire chiefs on that night. Video: Reuters 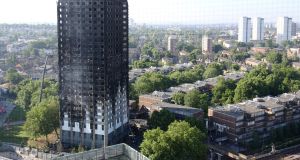 The survivors and the bereaved of Grenfell Tower fire have welcomed a damning public inquiry report into the disaster which concludes there were “systemic failings” by the London fire brigade. But they said it was “heartbreaking” to read that more of their loved ones could have been saved if the building was evacuated earlier.

The long-delayed report into the blaze that claimed 72 lives was released on Wednesday morning by the inquiry chairman Sir Martin Moore-Bick and was branded “strong” by Grenfell United which represents hundreds of members of the community affected by the June 14th, 2017 disaster. The group said the London fire brigade’s (LFB) failure to prepare and plan for a cladding fire and evacuation, described by Sir Moore-Bick as “gravely inadequate”, was a breach of national guidance and the LFB’s leadership must now “stop hiding behind the bravery of their front line fire fighters [AND]... face consequences for these failings if there is to be change”.

The survivors said rank and file firefighters, rather than being scapegoated in the report, were let down by their training, procedures, equipment and leadership. Sir Moore-Bick’s conclusion that the refurbishment of the tower completed in 2016 with the fixture of combustible cladding broke building regulations adds to their “determination to see criminal charges brought against those responsible for turning our homes into a death trap”, they said.

“Justice means different things for all of us but the truth needs to be at the heart of our collective healing. We have been waiting a long time for this report. Today’s findings give us some confidence that our journey towards truth has finally begun. We now need to urgently see responsibility and action from this report, not excuses. One of the most worrying findings is Sir Martin Moore-Bick’s view that the LFB are currently an institution at risk of not learning the lessons from Grenfell.”

Unveiling the report, Sir Moore-Bick called for urgent action by the government to improve safety in high rise blocks and in a message to the British prime minister, Boris Johnson, said he wanted to see his recommendations, which included improvements in fighting high-rise fires and new national guidelines for evacuating high-rise flats, implemented without delay.

“Grenfell Tower was home to a strong and vibrant community that was torn apart by the fire,” he said. “In some cases whole families died and many people are mourning relatives friends and neighbours with whom they shared their lives.”

Behailu Kebede, in whose fourth floor flat the fire started, was not at fault.

The principle reason the fire spread was the aluminium composite cladding filled with plastic used on the building exterior.

Firefighters showed “courage and devotion to duty” and 999 call operators were “unstinting” in their efforts to help trapped residents.

The LFB failed to lift the stay put advice when the stairs remained passable , which cost lives

Communications systems failed and there were serious deficiencies in command and control.

The survivors said the fact Moore-Bick found the refurbishment breached fire safety regulations means the Royal Borough of Kensington and Chelsea which owned the building, its tenants management organisation and the construction companies involved now have serious questions to answer in the second phase of the inquiry which starts in January and will conduct 18 months of hearings running until the middle of 2021.–Guardian