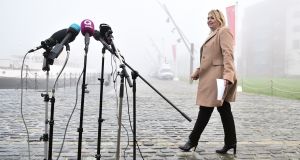 Where am I?: Karen Bradley on her first visit to Northern Ireland as secretary of state, in January. Photograph: Charles McQuillan/Getty

Pay attention, entrails-pickers: Britain’s dead government has yielded up a new sign. She is Karen Bradley, actual secretary of state for actual Northern Ireland, and she has granted an interview to the House, a parliamentary magazine . “I freely admit,” Karen freely admitted, “that when I started this job, I didn’t understand some of the deep-seated and deep-rooted issues that there are in Northern Ireland. I didn’t understand things like when elections are fought, for example, in Northern Ireland – people who are nationalists don’t vote for unionist parties and vice versa.”

For me, I think that quote may be the equivalent of the death blow in Kill Bill. Do you know the one? You get hit just with fingertips, “and then he lets you walk away. But once you’ve taken five steps, your heart explodes in your body, and you fall to the floor, dead.” So with the Northern Ireland secretary’s hot take on Northern Ireland. My mechanism might be shot for good after reading it. I may well be typing my last five steps here.

Clearly, it is not simply the initial imbecility of having no clue about the central facts of Northern Irish politics and history, even though you were 28 (twenty-eight) when the Belfast Agreement was signed. It is also the second imbecility of thinking you should ever mention that in public, much less as delightedly, as Karen did. “It’s when you realise that,” burbled the secretary of state, “that you can then start to understand some of the things that the politicians say and some of the rhetoric.”

Ideally, you would start understanding these things some decades before you were the cabinet minister with operational responsibility for arguably the most sensitive region of the United Kingdom. Instead, Karen’s breezy My Learning Curve speech casts high office as a remedial scheme for the unreachable outliers of Family Fortunes survey respondents. “We asked 100 people what they imagined were the Ladybird-level facts about Northern Ireland.”

Karen’s answer is the type of WTF-ery that allows even Vernon Kay (Vernon Kay) to mug to camera with the practised eyebrow-raise that says: Where do they find these quarterwits? It was previously thought that any challenge to Andrea Leadsom’s position as stupidest Downing Street minister would have to hail from the mineral or at least vegetable kingdoms. But this is quite sensational from Karen. Theresa May’s decision to appoint her to this government of all the talentless underscores exactly where the UK stands. If you hadn’t already swallowed the red pill, you may safely consider Karen’s interview as your dose. No going back now. The answer to the question “How low is the bar?” is: the bar is in another hemisphere. The bar is orbiting Jupiter. There is no bar.

Darker portents attend Karen’s predecessor as the British cabinet minster most wantonly and insouciantly unsuited to their job. It’s been a mixed week for Boris Johnson. On the downside for us, Boris has been explicitly backed for the leadership by the cruelly miscast kingmaker Jacob Rees-Mogg. On the upside, Johnson’s statement announcing his divorce from his wife, Marina Wheeler, tees up a series of malarial Love Actually plot lines for when he later – or sooner – gets the keys to 10 Downing Street. (And if you’re still doubting the heart-exploding inevitability of that scenario, you must have been watching the global upsets of the past two years on tape delay. Everything that can go wrong does. Buy shares in distilleries today.)

As for the coveted endorsement from someone Boris would unquestionably have pitied mercilessly at school (they missed being Eton contemporaries by a year), it came in a radio interview on LBC. “Two years ago, in the Conservative Party leadership campaign, I supported Boris Johnson, because I thought he would deliver Brexit extraordinarily well,” Rees-Mogg intoned, suggesting he has inherited all his father’s gifts of prophecy. “I haven’t seen anything that would cause me to change my mind on that.” Not anything?! Should have gone to MonocleSavers.

With David Davis, it’s like setting fire to a building, running away, then standing outside telling the emergency services how you’d handle the rescue differently

Yet Boris is undeniably back. He has never been more back. Perhaps the most striking feature of the immediate period is how people decisively written off as wrong’uns in the very recent past are emerging again as comparatively attractive prospects. Two years ago, Michael Gove had been deservedly downgraded to a mere Brutus emoji; now he’s apparently a leadership contender once more.

Perhaps the preposterous inadequates of the past do all seem like elder statespeople now. Others appear so inspired by their accelerated rehabilitation that they are trying to pull off something similar instantly. Take David Davis, who announced this week that he would attend a Leave Means Leave rally in Bolton “as a matter of principle, to ensure Brexit is delivered”.

What can you say? Until about 10 minutes ago, David had spent two years as the cabinet minister literally in charge of delivering it. This is like setting fire to a building, running away, then standing outside telling the emergency services how you’d be handling the rescue differently.

Expect plenty more auditions for the role of Captain Hindsight in the weeks and months ahead. First the government and its renegades were post-truth; now they are post-shame. – Guardian