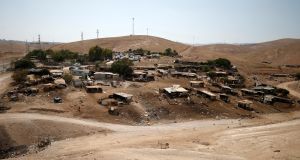 Palestinian Bedouin encampment of Khan al-Ahmar in the occupied West Bank: the villagers rejected Israeli proposals to relocate to two other West Bank locations, one close to a rubbish dump. Photograph: Mohamad Torokman/Reuters

The Israeli high court of justice has given the green light for the demolition of the West Bank Bedouin village of Khan al-Ahmar, rejecting petitions filed by the residents in a case that has attracted significant international attention.

The judges ruled that the buildings, close to the road between Jerusalem and the Dead Sea, could be demolished next week. The high court expressed the hope that the eviction would be peaceful and without physical resistance.

Ireland, along with other European states, has lobbied against Israeli plans to demolish the village, saying such a move would further undermine the viability of the two-state solution and prospects for a lasting peace.

Judge Yitzhak Amit wrote that it was the obligation of the military commander to act in an “egalitarian and reasonable manner” to enforce the ruling, whether it referred to the illegal construction by Israeli settlers or Palestinian residents.

The supreme court vice-president, judge Hanan Melcer, hinted that the state should examine whether it is possible to compensate the residents.

Located close to the settlement of Kfar Adumim, the encampment is home to some 180 Bedouin, who were relocated to the area from the Negev desert in southern Israel in the early 1950s. The West Bank’s Arab Bedouin are a small, impoverished minority among the broader Palestinian population.

Like many other Bedouin encampments, residents of Khan al-Ahmar live in corrugated shacks or tents, often without electricity or running water, and raise livestock.

Khan al-Ahmar is located in the area known as E1, between Jerusalem and the large settlement city of Ma’ale Adumim. Israel hopes to expand Ma’ale Adumim by building in E1 but so far the plans have been thwarted, partly due to strong opposition from the Palestinian Authority, backed by the international community, who argue that such a move would essentially split the West Bank into two.

Defence minister Avigdor Lieberman congratulated the high court judges for their “courageous ruling” despite what he called an “orchestrated hypocritical onslaught” by Palestinian president Mahmoud Abbas, the left wing and European countries.

“Nobody is above the law. Nobody will prevent us from exercising our sovereignty and our responsibility as a state,” Mr Lieberman said.

Knesset member Ayman Odeh, head of the predominantly Arab Joint List, said that the families of Khan al-Ahmar had fallen victim to the destructive politics of the right-wing government that is expanding the settlement blocs at the expense of Arab communities.

“These are not just families who are being evicted for the third time by the state, this is an overall course of action that will prevent any chance of establishing a Palestinian state and making peace,” he said.