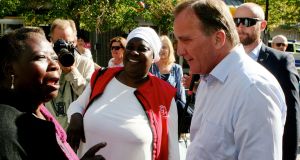 Sweden’s prime minister Stefan Lövfen campaigning in the Farsta neighbourhood in Stockholm: has appealed to voters to “vote for a stable government capable of leading Sweden in uncertain times”. Photograph: Daniel Dickson

After a bad-tempered campaign, dominated by immigration challenges and hospital waiting lists, neither Sweden’s ruling left nor right camps are likely to be able to form a majority coalition.

That makes lengthy post-election horse-trading likely – or even some sort of co-operation of the right “alliance” parties with the far-right populist Sweden Democrats (SD).

After dropping back from an early surge, a poll of polls suggests the anti-immigrant, EU-critical SD will capture about 20 per cent support, up six points on its last election performance.

SD leader Jimme Akesson has pulled in voters by linking the refugee crisis, which proportionately brought more people into Sweden than even Germany, to wider problems with healthcare, schools and public security.

After a series of riots and rapes, some involving would-be refugees, his party is proposing a total asylum clampdown, tougher penalties for crime and greater police powers.

Other parties have been racing to present alternative migration policies, some that differ only by degrees, as public attitudes cool towards asylum seekers.

Sweden’s ruling Social Democrats are just four points ahead of the SD in most polls and may squeeze back into power with an even weaker minority government than before.

Its struggling prime minister Stefan Lövfen has appealed to voters in the last days of campaigning to “vote for a stable government capable of leading Sweden in uncertain times”.

Many see that as an unsubtle play for a grand coalition with the conservative-liberal Moderates, an effort resisted so far by Moderates leader Ulf Kristersson as “autocratic”.

“Löfven wants to govern regardless of the election result, but we need a clean slate,” said Mr Kristersson, a trained economist and effective communicator. But he is dismissed by some internal critics as a lightweight “coffee-break politician”.

The poll of polls gives the centre-right “alliance” led by his Moderates a three-point lead over the ruling left. It remains to be seen whether Mr Kristersson’s determination to rule will influence his vow not to co-operate with the SD.

After he ran a law-and-order campaign, a growing number of his supporters are open to a deal with the SD – as are Christian Democrats, another alliance party member.

“It is possible that we will end up with a government based on the Moderates and the Christian Democrats that will rule with SD support, adapting policies to them without negotiating openly,” said Dr Andrej Kokkonen, political scientist at the University of Gothenburg.

A wild card in the polls could be a third, centre-right alliance member. Centre Party leader Annie Lööf has refused outright to work with the SD, prompting speculation she might be open to an approach from the left. But her support will come at a high price: for Mr Löfven to forgo another term as prime minister.

Regardless of what happens when polls close on Sunday at 8pm, political analysts already say the far-right is the big winner, likely to emerge as second-largest party – or even largest if they are underestimated in polls.

“They are now large enough to block a pure left or right government,” said Dr Kokonnen, “thus any future government must rely on the SD or co-operate with the other side.”

In this environment, votes matter less than the general drift towards openly racist politics on offer in Sweden, mirroring developments elsewhere in Europe.

The SD has expelled scores of politicians from its election lists after online outbursts – this week one candidate called refugees “venomous snakes” – but such revelations have had little effect on poll numbers.

“What I hope is that this election result will cause a reaction among people to mobilise for democratic values and ideas,” said Daniel Poohl, editor-in-chief of the investigative magazine Expo, which has published many such SD exposés.

International organisations say a further shift is likely in how Sweden, a self-described “moral superpower”, engages with the EU on the unresolved migration crisis.

“You can expect less international leadership from Sweden on migration and refugee issues,” said Matthew Scott, analyst at the Raoul Wallenberg Institute of Human Rights and Humanitarian Law. “Even the Social Democrats are now embracing a European approach to this issue, which attempts to – but doesn’t always live up to – international human rights law.”