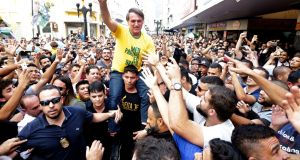 Presidential candidate Jair Bolsonaro carried on the shoulders of a supporter moments before being stabbed during a campaign rally in Juiz de Fora, Brazil on Thursday. Photograph: Antonio Scorza/Agencia O Globo via AP

The stabbing at a campaign rally of the far-right candidate Jair Bolsonaro in Brazil’s presidential election will likely have serious if for now unpredictable implications for the rest of the race.

Though he has already recorded a video from his hospital bed, the former army captain remains in intensive care and his medical team describe his condition as “grave but stable”. After receiving a 12cm wound, according to one of his sons, it is far from clear if he will recover in enough time to return to the campaign trail before the October 7th vote.

Other candidates have already announced they have for now suspended campaigning. These will likely restart soon once the initial shock of Thursday’s attack subsides, but rivals now face a dilemma. The centre-right candidate Geraldo Alckmin, whose chances have been hit hardest by Bolsonaro’s surge to the front in polls, had been planning to confront him more directly in a bid to boost his own sagging chances.

But now, rather than taking on an unprepared political adventurer with a record of racist, homophobic and misogynist statements and the highest rejection ratings among voters, he must attempt to deconstruct a law-and-order obsessive who was stabbed while being carried shoulder-high by supporters while wearing a “My Party is Brazil” T-shirt.

Another of Bolsonaro’s sons on leaving the hospital bragged that the attack meant his father would now be elected on the first round. That remains unlikely, but it is not just his father’s supporters who predict the attack will provide a boost to his chances of eventual victory.

What is already clear is the attempt on Bolsonaro’s life will inject a further dose of venom into a race he worked assiduously to polarise for political advantage. He has sought to delegitimise Brazil’s left, threatening to treat the activities of land reform groups as terrorism while the supreme court has demanded he explain his threat to “execute” members of the Workers Party in the jungle state of Acre.

So his supporters have been quick to seize on the fact that the would-be assassin, who seems to have suffered from psychiatric problems, was until 2014 a member of a small left-wing party. From being an aggressive demagogue with little respect for democratic or civic norms, Bolsonaro is now well positioned to play the patriotic victim with just a month to go until the first round of voting.

The challenge now is for Brazil’s genuine democrats of all stripes to respond in time to this new, disturbing political landscape.