Brexiteer says backstop issue holding up talks, and answer is not to put up a border 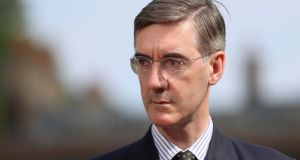 Brexit campaigner Jacob Rees-Mogg: “I have consistently said this is about changing the policy, not the prime minister.” File photograph: Simon Dawson/Reuters

Leading Tory eurosceptic MP Jacob Rees-Mogg has called on prime minister Theresa May to repudiate the December agreement with the EU on the Northern Ireland Border backstop.

He said that the backstop issue was holding up the Brexit talks unnecessarily and that the British government should simply not put up a border.

The backstop agreed between the EU and UK last December provides for regulatory alignment between the Republic and the North in order to avoid customs checks. It would come into effect in the absence of a wider Brexit deal providing for a frictionless Border.

Mr Rees-Mogg was speaking to journalists following a meeting in Brussels between EU chief negotiator Michel Barnier and the House of Commons Committee for Exiting the EU. Earlier the group had a separate, “constructive” meeting with Irish Ambassador to the EU Declan Kelleher and his Brexit deputy, Emer Deane.

Mr Rees-Mogg revelled in what he said was agreement with Mr Barnier that Ms May’s Chequers proposals were dead.

He denied that his opposition to Chequers was an attack on Ms May. “I have consistently said this is about changing the policy, not the prime minister,” he said.

The committee’s chairman, Labour MP Hillary Benn, said he believed that the Chequers White Paper proposals for a “facilitated customs arrangement”, which would see the UK collecting duties on behalf of the EU, and for a common regulatory rulebook, were not acceptable to the EU.

“And it’s clear therefore that what is on offer is either a deal like Canada, which would not give us what we need, or my view is remaining in a customs union with the European Union. That is the only alternative potentially on the table.”

He reiterated that the UK was running out of time and warned that if there is no Withdrawal Agreement there will be no transition. No deal would be a disaster for the UK, he said.

Asked about his ally Boris Johnson’s qualifications to lead the Tory party, Mr Rees-Mogg replied, his tongue firmly in his cheek, “All of you here know that Brussels correspondents are enormously influential and authoritative and respected media figures, and that any one of you could be a candidate for leadership at some future date for whichever party you chose to belong. Brussels is a great training ground for leadership.”

Mr Johnson served as Brussels correspondent of the Daily Telegraph in the 1990s.