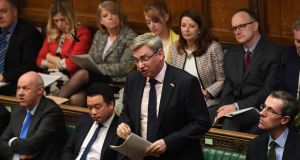 Boris Johnson’s government will take the first step towards decriminalising non-payment of the BBC licence fee on Friday, as Downing Street’s dealings with the media are under scrutiny.

Opposition MPs warned on Thursday that No 10 was undermining democracy by seeking to exclude some political correspondents from official briefings.

Culture secretary Nicky Morgan will launch a public consultation into decriminalising non-payment of the licence fee on Friday. But, speaking ahead of the launch, she made clear that the government has the licence fee in its sights.

“As we move into an increasingly digital age, with more and more channels to watch and platforms to choose from, the time has come to think carefully about how we make sure the TV licence fee remains relevant in this changing media landscape. Many people consider it wrong that you can be imprisoned for not paying for your TV licence and that its enforcement punishes the vulnerable,” she said.

A government review in 2015 recommended against changing the criminal sanctions regime, and senior BBC figures have warned that the loss of revenue from more widespread non-payment would damage the corporation’s capacity to fulfil its public service broadcasting remit.

But Julian Knight, the Conservative chairman of the Commons digital, culture, media and sport (DCMS) committee, suggested it was time to look at abolishing the licence fee altogether.

“With negotiations on its funding due to start later this year there’s a need for an urgent and open conversation about how people consume media and how they should pay for it. As chair I’ll be urging the DCMS committee to take the lead on steering the BBC towards a new and sustainable funding model which ensures the most vulnerable in our society do not lose out,” he said.

Opposition MPs criticised the government’s boycott of the BBC’s Today programme during a debate about the walkout from Downing Street on Monday of political editors after other journalists from the parliamentary lobby were excluded from a briefing about the next stage of the Brexit negotiations.

“The ability of the lobby to have access to briefings without favour is a long-standing tradition, and one vital to the health of a functioning democracy,” shadow culture secretary Tracy Brabin said.

Cabinet office minister Chloe Smith said the government was committed to being open in its dealings with the press, asserting that Monday’s briefing was an “additional technical, specialist” briefing.

“Just how sinister can it get? The names of journalists were read out and groups assembled on either side of a rug before it was announced who would have access and who would be excluded.

“No Scottish media outlets were even told about the briefing. I congratulate all the journalists involved yesterday for showing solidarity with their colleagues and refusing to participate in that circus,” he said.