Two patients from the same family in England have tested positive for coronavirus, the first such cases in Britain. Major airlines have suspended flights to China and many countries have chartered planes to evacuate their citizens from Wuhan. 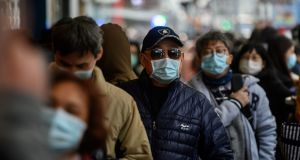 People queue to buy face masks from a shop in Hong Kong as a preventative measure following a virus outbreak which began in the Chinese city of Wuhan. Photograph: Philip Fong/AFP/Getty Images.

Several countries have closed their borders to arrivals from China as countries around the world raced to contain the coronavirus outbreak amid a rising death toll.

The US introduced an entry ban on foreign nationals who have visited China in the past two weeks after declaring the virus a public health emergency on Friday. It insisted the risk to Americans remained low.

The Chinese government criticised the measures, saying it contradicted the World Health Organisation’s (WHO) appeal to avoid travel bans and implied that Beijing was not doing enough to contain the virus’s spread beyond China’s borders.

“Just as the WHO recommended against travel restrictions, the US rushed in the opposite direction,” said foreign ministry spokeswoman Hua Chunying. “[It is] certainly not a gesture of goodwill.”

On Saturday, Australia echoed measures taken by the US, declaring that no one travelling from mainland China would be allowed into Australia unless they were Australian citizens or residents or their dependents. Entry will be denied to anyone who has left or transited through mainland China from February 1st.

Russia will start evacuating its citizens from China next week. Kremlin spokesman Dmitry Peskov said the evacuations would be from regions that had been most affected by the outbreak, Interfax and TASS news agencies reported.

State TV reported on Saturday evening that the death toll had risen to 304 in China, with more than 12,000 confirmed cases.

Hubei province, the epicentre of the outbreak, was under a virtual quarantine on Saturday, with roads sealed off and public transport shut down. Elsewhere, authorities placed growing restrictions on travel and business.

In Beijing, counters were set up at the entrances of housing estates, where volunteers wearing red arm bands and masks noted down details of residents coming back from their hometowns after the Lunar New Year holiday.

The UK department of health said 203 people had been tested in the country as of 2pm on Saturday, with 201 results coming back negative and two positive.

The pair who have tested positive – two members of the same family – are being treated at a specialist unit in Newcastle. They had checked into the Staycity apartment-hotel in York on Wednesday and were taken to hospital that evening.

The British foreign office said it was withdrawing some staff from its embassy and consulates in China.

“In the event that the situation deteriorates further, the ability of the British Embassy and Consulates to provide assistance to British nationals from within China may be limited,” the UK government said in a statement.

German health minister Jens Spahn called for calm as more than 100 Germans and family members landed in Frankfurt, none showing any symptoms of the virus. He warned against hysteria and hostility from the public.

American citizens who have travelled within the past two weeks to Hubei province will be placed in quarantine for 14 days, the longest incubation period for the virus. Those who visited other parts of mainland China will undergo health checks and 14 days of “monitored self-quarantine”.

Several airlines have cancelled services to China, including British Airways and all three major US carriers. On Saturday, Qantas said it would suspend its two direct flight routes from Australia to mainland China from February 9th.

Apple Inc on Saturday said it would shut all of its official stores and corporate offices in mainland China until February 9th.

It is joining a handful of overseas retailers, including Starbucks Corp and McDonald’s Corp to temporarily shut storefronts as a precautionary measure.

Japan, where 17 cases have been identified, announced restrictions on Friday, barring entry to foreigners who visited Hubei province within the past two weeks or obtained visas there.

Singapore is banning entry to all Chinese visitors and foreigners with a recent history of travel to China, starting from Saturday. The ban – one of the most far-reaching moves to deter the fast-spreading virus – in effect shuts out the island’s largest group of visitors and will also bar other travellers who have been to China in the past 14 days.

Japan has repatriated hundreds of citizens from in around Wuhan – the capital of Hubei province – three of whom tested positive for the disease.

Robert Redfield, the director of the US Centers for Disease Control and Prevention, said the US travel restrictions had been imposed after the WHO declared the coronavirus outbreak a global health emergency on Thursday.

“Our goal is to do all we can do to keep it that way.” – Guardian/Reuters