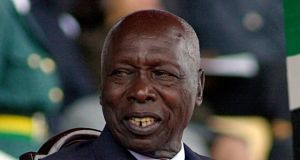 “He passed away peacefully, I was by his side,” announced his son, Senator Gideon Moi, saying he wanted to give “heartfelt gratitude to all Kenyans and non-Kenyans for their prayers and thoughts”.

Moi was a former schoolteacher and deputy to Jomo Kenyatta, Kenya’s first president after the east African country became independent from British rule.

When Moi came to power in 1978 he was initially popular and – as a member of neither of Kenya’s two largest tribes, the Kikuyu and Luo – he promised to maintain peace and stability. However, he quickly cemented his rule, crushing opposition and jailing, killing or torturing dissidents. In 1982 he oversaw an amendment to the constitution to legally make Kenya a one-party state.

In total, Moi won five elections, three in which he was the only presidential candidate. He left power in 2002. He is remembered in Kenya for introducing a free milk programme in schools, aimed at improving both health and attendance, and for allying with the US against communism during the Cold War.

As local TV channels provided wall-to-wall coverage of his death, some Kenyans told The Irish Times they almost felt nostalgic for Moi, expressing dissatisfaction with the presidency of current leader Uhuru Kenyatta, the son of the country’s first president.

Others remembered Moi as a brutal dictator, including BBC journalist Ferdinand Omondi, whose father was among more than 2,000 people arrested in 1982 following an attempted coup, meaning he missed the first six years of Omondi’s life.

“The president’s crackdown affected both real and imaginary enemies, with lots of collateral damage,” he wrote on Tuesday.

On Tuesday, #RIPMoisVictims became the most trending hashtag on Twitter in Kenya, as citizens called for more acknowledgement of the suffering caused by Moi.

“Daniel Moi was a dictator who ruled with iron fist. He killed learned Kenyans who tried to challenge his presidency,” wrote Aadoo Di Ozzo. “We will never forget.”

Many mentioned Nyayo House, a government building where thousands of people are said to have been held without charge, tortured and interrogated.

Moi was also accused of presiding over massive levels of corruption. In 2007, a report by international risk consultancy Kroll alleged that more than €1.18 billion euros of government money had been stolen by Moi’s relations and associates, leaving both of his sons worth hundreds of millions of euro.

Mr Kenyatta, the president, declared a period of national mourning and said Moi would be “accorded a state funeral with all appropriate civilian and full military honours”.

Uganda’s president, Yoweri Museveni, who has been in power since 1986 and is standing for a sixth term in next year’s elections, called Moi an “icon”.

In Moi’s last public speech as president, which is being widely shared online among Kenyans, he unexpectedly asked for forgiveness. “If you have wronged me, I forgive you. And if there’s someone who I have hurt, forgive me.”