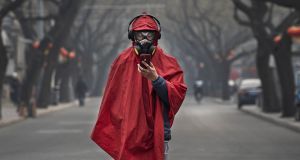 A Chinese man wears a protective mask, goggles and coat as he stands in a nearly empty street during the Chinese New Year holiday on Sunday in Beijing, China. Photograph: Kevin Frayer/Getty 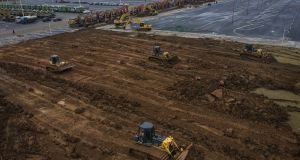 Bulldozers are used at a construction site of a field hospital in Wuhan, Hubei province, China. Wuhan Leishenshan hospital will be completed on February 5th, with a capacity of 1,300 beds for coronavirus patients, according to the government. Photograph: Getty

Anxiety is mounting among the small Irish community in Wuhan as the number of deaths related to the coronavirus jumped to 56 on Sunday, and several countries announced plans to evacuate their nationals from the stricken Chinese region.

Health officials said there were now 2,066 confirmed cases of the deadly virus, plus 2,692 suspected cases – the vast majority of them in the central province of Hubei.

The virus has been detected in almost 200 Chinese cities and has spread to several other countries, including the United States, France, Australia, Vietnam and Japan.

The US state department said it would charter a flight to collect its consular staff on Tuesday and bring them to San Francisco, and offer a limited number of seats to other US citizens.

France, Japan, the UK, Singapore and South Korea, among other countries, were also discussing plans to repatriate citizens over the weekend.

There are at least six Irish nationals known currently to be in Hubei, which has been under a lockdown order for the past four days, but the Irish embassy in Beijing said while they were monitoring the situation very closely there were no plans to arrange an evacuation.

“We have been in contact with members of the Irish community in Hubei and for now everyone is just hunkering down,” Eoin O’Leary, Irish Ambassador to China, told The Irish Times. “We are in regular contact with the WHO and the Chinese health ministry, and while this is very serious it seems it is not as yet a major crisis.”

The embassy would be holding meetings with representatives of the other EU member states and the WHO on Monday to discuss updates and options, he said.

He urged any Irish citizens in the affected region who have not registered with the embassy to do so immediately, to enable the embassy to keep in close contact and offer advice and support where needed.

A 59-year-old college lecturer from the west of Ireland, who asked to be identified only by his first name, Mike, has been alone in a Wuhan apartment for the past four days and is afraid to go out.

Irish abroad: Do you live in an area affected by the coronavirus?

“I am very anxious, very nervous now, I have to say. I don’t speak Chinese and I have stayed at home since they announced the lockdown,” he said. “I don’t want to go out but I will have to go to the supermarket [on Monday]. At my age, you’d be more concerned about these things. It’s not like when you are 25 and you can just brush it off easily.”

Conor O’Neill, from Lucan in Dublin, is based in Wuhan but is currently in another part of Hubei, Enshi, where there have been no cases reported as yet but the authorities are taking stringent precautionary measures.

“The entire province is shut down. They’ve used logs and bricks to block off some roads; they keep driving through the village with megaphones saying ‘Stay indoors!’,” he said. “Government officials came to our house this morning to take our information and temperatures.”

While he was concerned about the rapidly developing situation, he said he did not feel an evacuation would be appropriate.

Chinese health officials said on Sunday the disease had an incubation period of up to two weeks, during which time it could be contagious, even though patients were not displaying symptoms.

Given that information, “How does it make sense to evacuate?” asked Liam Griffey, originally from Ennis in Clare and currently also in Wuhan.

With the sharp increase in cases, tensions were running high in the city, he said. “Some people seem to be very anxious. My girlfriend’s friend is supposed to be infected.”

Michael, also from the west of Ireland, said he would not take up the offer of an evacuation if it were made because his family was in China, but he thought the embassy should offer Irish nationals the option.

“I’m sure many people are agitated and scared... and would find it appealing,” he said.

More than 50 million people are under effective lockdown in Hubei alone, and many other provinces are introducing some similar measures as the virus spreads.

On Sunday, China announced a temporary ban on the sale of wildlife in markets, restaurants and online. The coronavirus has been traced to a seafood market in Wuhan that was illegally selling wildlife.

China’s National Health Commission minister Ma Xiaowei warned on Sunday that the ability of the virus to spread was increasing.

“According to recent clinical information, the virus’s ability to spread seems to be getting somewhat stronger,” he said.

He admitted the government’s knowledge of the novel coronavirus was still limited, and said the country was now entering a “crucial phase” in its efforts to curb its spread.

Gao Fu, head of China’s Centre for Disease Control and Prevention, struck a positive note. “From what we see now, this disease is not as powerful as Sars,” he said, referring to severe acute respiratory syndrome, involving a virus that claimed the lives of nearly 800 people 17 years ago.

In a packed press briefing on Sunday, the mood was extremely tense. Surrounded by throngs of mask-wearing, anxious Chinese journalists, Mr Gao had to make several attempts to calm them.

“The virus is crazy. We don’t want to be crazy,” he said at one point.