Boris Johnson to promise to bring Britain together after Brexit 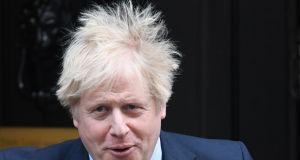 Boris Johnson will promise to bring Britain together after Brexit in a video statement an hour before the UK leaves the EU, and will also describe the departure as the beginning of a new era of greater equality.

The UK is scheduled to leave the union at 11pm on Friday.

The prime minister will chair a cabinet meeting on Friday morning in Sunderland, the first city to declare support for Brexit on the night of the 2016 referendum on EU membership.

“Our job as the government – my job – is to bring this country together and take us forward. And the most important thing to say tonight is that this is not an end but a beginning. This is the moment when the dawn breaks and the curtain goes up on a new act. It is a moment of real national renewal and change,” Mr Johnson will say in the statement.

“This is the dawn of a new era in which we no longer accept that your life chances – your family’s life chances – should depend on which part of the country you grow up in. This is the moment when we begin to unite and level up.”

Prime ministerial addresses to the nation are usually filmed by one of the main broadcasters and pooled with others, but Downing Street has used its own digital unit to record Mr Johnson’s message, which will be posted on Facebook.

The BBC, ITV and Sky News have yet to decide whether to broadcast the video and a BBC spokesman said the corporation would evaluate its news value in the same way as any other third-party video.

Labour leader Jeremy Corbyn said on Thursday night that Britain’s exit from the EU meant it was standing at a crossroads where its place in the world was concerned.

“Britain’s place in the world will change. The question is what direction we now take. We can work with other countries to develop trade, improve rights and protections, invest in our communities, tackle the threat of climate catastrophe, fight human rights abuses and promote peace. We can build a truly internationalist, diverse and outward-looking Britain.

“Or we can turn inwards, and trade our principles, rights and standards to secure hastily arranged, one-sided, race-to-the-bottom trade deals with Donald Trump and others,” he said.

Mr Corbyn said Labour would always want to ensure a close, strong and co-operative relationship with the EU and to ensure that EU nationals in the UK are guaranteed permanent residency rights. He said leaving the EU was only the beginning and that Labour would hold the government to account in the trade negotiations that will begin in the next few weeks.

“We will resist a toxic Trump deal that puts our NHS, food standards and jobs at risk. That choice of which path we take for a post-Brexit Britain now lies before us,” he said.

“As we leave the European Union, whatever side we took in the Brexit debate, we now need to bring the country together to shape our common future, work to rebuild and strengthen our communities, and eliminate poverty and injustice in our society.”