Explainer: Friday is Brexit Day, so what happens next?

Could there still be a disorderly Brexit at the end of this year? 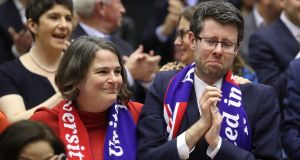 At 11pm on Friday, January 31st, after 47 years in the European Economic Community and European Union, the United Kingdom is formally leaving the bloc, some 1,317 days after the Brexit referendum. It is the first time in the history of the European economic and political bloc that it has lost a member.

What will change on February 1st?

In practice, everyday life will look like it was on January 31st. A business-as-usual standstill agreement, known as the transition period, means that until December 31st, 2020, the UK will continue to be bound by EU laws but will no longer have a say in how those laws are formed because Brexit means that it must leave the EU’s political institutions, bodies and agencies. The UK’s 73 MEPs have lost their jobs, freeing up two additional seats in the European Parliament for Ireland. These will be taken up by the two “cold storage” MEPs Fianna Fáil’s Barry Andrews and Fine Gael’s Deirdre Clune who were elected last year but did not take up their seats pending the UK’s exit.

During the 11-month Brexit purgatory period, the European Commission will monitor the UK’s compliance with its laws and the European Court of Justice will retain the power to make rulings and fines against the UK if breaches of EU rules and laws are identified.

What does it mean for the people?

British subjects will no longer be EU citizens but they will continue to enjoy free movement across the EU for the transition period. From January 1st, 2021, British people living in the remaining 27 EU member states will have their rights to live in those countries protected under the Brexit agreement. The three million EU citizens living in the UK have until June 2021 to apply for “settled status” allowing them to stay and enjoy existing rights after Brexit. Irish citizens in the UK may apply for “settled status” but do not have to because they enjoy a right of residence in the UK through the separate Common Travel Area agreement between Ireland and the UK. This long-standing relationship is not reliant on the UK’s membership of the EU.

What will happen to Northern Ireland during the transition period?

Nothing. The “protocol” for Ireland and Northern Ireland will not be activated as the UK will remain in the EU customs union and single market for the 11-month period. The Brexit deal’s so called “front stop” compromise - an Irish Sea trade border chosen to avoid a hard border between Northern Ireland and the Republic - will only come into effect on January 1st, 2021.

Can the transition period be extended?

Yes. The Brexit deal allows the UK and EU to decide by July 1st to extend the Brexit limbo by up to two years, but UK prime minster Boris Johnson has legally blocked himself requesting an extension under legislation passed to implement the withdrawal agreement. Legislation could be amended to bypass this ban, though it would be seen as a political climbdown by Johnson.

So is that the end of EU-UK negotiations?

Eh, no way. Exiting was only the first part of the divorce. The second involves the EU and the UK reaching an agreement on how they will work and trade with each other in the future and this is regarded as the most difficult part. The aim of the negotiations is to agree a deal that will come into force by the end of the transition period.

Will that be enough time?

It will be extremely difficult given the depth and range of the issues and areas to be discussed. Boris Johnson says a deal is possible by the end of the year; the EU thinks otherwise. The EU’s chief trade negotiator Phil Hogan, Ireland’s commissioner, has said there will be only “four or five” negotiating rounds before July when the UK must decide whether to extend the transition period.

What will those negotiations touch on?

In addition to trade issues around services, fisheries, agriculture and state aid, the talks will also cover security and intelligence co-operation, data sharing, energy and transport links, research collaboration and the UK’s participation in EU science, space and education programmes.

When will the negotiations begin?

The European Commission will publish its draft negotiating mandate on February 3rd that must be approved by EU leaders at a summit on February 25th. Talks should begin in early March.

How difficult could these negotiations be?

Potentially extremely difficult. The more the UK decides to diverge from the rules and standards of the EU single market, the more difficult it will be to agree a free trade agreement. One British government minister has said the UK will not align itself with EU rules after Brexit. If there is no trade deal agreed by December 31st, 2020, then the following day a “hard Brexit” will kick in: World Trade Organisation rules with hefty tariffs will automatically apply on each other’s goods.

What will the early flash-point issues be?

The biggest sticking points, initially at least, are likely to be on access to fishing waters and the EU’s demand for a “level playing field” where there would be no advantage between the EU and UK in competition and business subsidies, social and environmental protections, and tax.

So could there still be a disorderly, cliff-edge Brexit at the end of this year?

Yes, if the EU and UK cannot agree on a future trading relationship.