Coronavirus: Irish in China advised to be ready to leave

Timelapse footage captures a near deserted Beijing as authorities call on the 20 million residents of the Chinese capital to stay at home amid the coronavirus outbreak. Video: Reuters 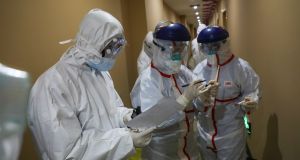 The Department of Foreign Affairs has advised more than 3,000 Irish people in mainland China to be prepared to leave because of the coronavirus outbreak.

In a change to its existing travel advice, the department says Irish people in China whose continued presence is not essential should “contact their travel agency or airlines regarding available routes out before any further restrictions may be imposed”.

The department’s updated advice follows new recommendations from the British authorities who have advised their citizens to leave “if you can”.

As before, the Department also advises against travel to Hubei province, the Chinese province where the outbreak started over a month ago, and to avoid non-essential travel to and within China.

An estimated 3,000 Irish people live in China, with a further 6,000 in Hong Kong. Three who lived in Hubei have already been evacuated.

Chinese authorities said on Tuesday the death toll in mainland China from the coronavirus outbreak has risen to 425, with the number of cases now standing at 20,438. Two people have died outside mainland China, in Hong Kong and the Philippines. Cases have been reported in 25 countries other than China, but as of Tuesday no confirmed cases have occurred in Ireland.

The National Public Health Emergency Team met on Tuesday in the Department of Health to review the available data and guidance regarding the outbreak and assess Ireland’s preparedness to handle the coronavisus.

“Ireland is well positioned to detect and respond to a case of the novel coronavirus that might arise here,” the team said in a statement, which added that it would meet again next Tuesday.

An expert advisory sub-group, which has been set up to make recommendations to the emergency team, will meet for the first time on Wednesday. It is being charied Dr Cillian De Gascun, laboratory director at the National Virus Reference Laboratory.

The UK’s Foreign Office changed its travel advice after health secretary Matt Hancock said he expected more cases to be diagnosed in the UK.

It was made after many airline carriers, including British Airways and Virgin Atlantic, grounded their flights serving China due to the outbreak. A number of Chinese airlines continue to operate, though not in Hubei province, where the outbreak started.

British foreign secretary Dominic Raab said: “We now advise British nationals in China to leave the country if they can, to minimise their risk of exposure to the virus.

“Where there are still British nationals in Hubei province who wish to be evacuated, we will continue to work around the clock to facilitate this.”

The elderly and those with pre-existing medical conditions may be at heightened risk, the foreign office warned.

Mr Raab told MPs in the Commons: “There’s an estimated 30,000 UK nationals in China and the proportion of the population who have the virus outside of Wuhan is much lower than in Wuhan itself.”

A total of 94 UK nationals and family members were evacuated to Britain from Wuhan on two flights last weekend.

The World Health Organisation said on Tuesday that although the virus was spreading rapidly in Hubei, the situation “currently” was not a pandemic.

Macau, one of Asia’s big gambling destinations, announced a temporary closure of its casinos, while off the coast of Japan, 3,700 people on board a cruise liner are being screened after a passenger tested positive for the virus.

Thousands of medical workers in Hong Kong held a second day of strikes to press for complete closure of borders with the mainland after three checkpoints were left open.