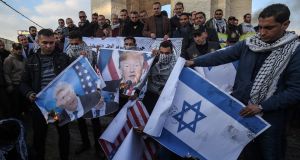 Palestinian protestors in Rafah burn images of US president Donald Trump, Israeli prime minister Benjamin Netanyahu and an Israeli flag during a demonstration against a US-led peace plan. Photograph: Said Khatib/AFP via Getty

The Israeli government is pushing ahead with plans to annex the Jordan Valley and all the Jewish settlements in the West Bank.

The move follows Tuesday’s publication of the United States Middle East peace plan which envisions Israel taking control of about 30 per cent of the territory that was captured from Jordan in the 1967 Six Day war.

Prime minister Binyamin Netanyahu originally planned to bring the annexation proposal before the cabinet on Sunday but the move has now been delayed in order to co-ordinate with the Americans and to draw up detailed maps.

Despite the delay, Mr Netanyahu vowed on Wednesday to press ahead with the move.

“I won’t miss the chance. I will extend sovereignty,” he said.

Israel’s attorney general has also cautioned that there may be legal problems for a transitional government to enact such a far-reaching decision only a month before the election – the first time that Israel will annex parts of the West Bank. “One must examine why the need for haste and why the subject cannot be left for a new government,” he said.

Defence minister Naftali Bennett, head of the far-right Yamina party, urged a speedy implementation of annexation, warning that postponing a decision to apply jurisdiction over the settlements would be a grave mistake.

“Whatever we fail to do before the [March 2nd] election will never get done – and we all understand that,” he said.

Mr Bennett said he has set up a special team comprising military and government officials to work on the immediate implementation of any decision to extend Israeli jurisdiction.

Extra troops have been sent to the Jordan Valley and the army has gone on heightened alert.

Senior US adviser Jared Kushner, president Donald Trump’s son-in-law and an architect of the “Deal of the Century”, said the administration’s peace plan recognises reality on the ground.

“[In] a lot of these areas . . . the reality is that Israel’s there, and they’re not leaving,” he said. “There’s never been a deal where they’ve contemplated doing that. And it’s not pragmatic. I’m not looking at the world as it existed in 1967. I’m looking at the world as it exists in 2020. You have five million Palestinians who are really trapped because of bad leadership.”

Demonstrations against the peace plan took place across the West Bank and Gaza Strip on Wednesday as the Palestinian leadership vowed to oppose what it termed the Israeli-American conspiracy.

Palestinian president Mahmoud Abbas said Jerusalem was “not for sale”.

“All our rights are not for sale or for bargaining,” he added.

The US plan calls for negotiations for the establishment of a demilitarised Palestinian state in 70 per cent of the West Bank, but only after the Palestinians meet a number of conditions: recognising Israel as a Jewish state; ending incitement against Israel; stopping payments to militants; halting legal proceedings against Israel in the International Criminal Court; recognition of Israeli sovereignty over Jerusalem; relinquishing the right of return for Palestinian refugees; and disarming Gaza militants.

The peace deal mentions east Jerusalem as the capital of a future Palestinian state but Israel will have sovereignty over almost the entire city, leaving only a few outlying Arab neighbourhoods beyond the West Bank separation barrier (but still within the Jerusalem municipality boundaries) under Palestinian control.

“It is impossible for any Palestinian, Arab, Muslim or Christian child to accept a Palestinian state without Jerusalem as its capital,” Mr Abbas said. “We say a thousand times, no, no, no. We rejected this deal from the start and our stance was correct. Your conspiracy won’t succeed.”