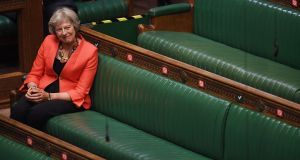 Former prime minister Theresa May in the House of Commons on Wednesday. ‘International air travel is necessary for trade; without it, there is no global Britain.’ Photograph: UK Parliament/Jessica Taylor/PA Wire

Boris Johnson has defended his government’s plan to introduce a 14-day quarantine for those entering the country from next Monday, despite warnings from Conservative MPs about the economic impact of the measure. The British prime minister told a press conference in Downing Street that the measure was necessary to control the spread of coronavirus now that the number of new infections in Britain was falling.

“There will be some exemptions for a limited number of people who need to cross the border, such as those engaged directly in the fight against coronavirus or who provide essential services. And we will review how the policy is working after three weeks. And of course we will explore the possibility of international travel corridors with countries that have low rates of infection – but only when the evidence shows that it is safe to do so,” he said.

The measure will not apply to visitors from Ireland unless they have been outside the Common Travel Area within 14 days of their arrival in Britain. Former international trade secretary Liam Fox was one of a number of Conservative MPs to criticise the introduction of quarantine at a time when every country in Europe has a lower infection rate than Britain.

“I’m afraid I simply cannot get my head around the public health mental gymnastics of this policy. If such a barrier was required, why was it not introduced earlier in the outbreak? And if it is a contingency measure against a second wave, why apply it to countries with a lower infection rate than we already have? Surely the answer lies in the government’s test-and-trace system, rather than unnecessary economic isolation,” he said.

Others warned about the impact on the economy, particularly on aviation and tourism, and former prime minister Theresa May said the government should instead focus on health screening at airports.

“Aviation supports one million jobs in the UK, including 114,000 in aerospace and 1,700 in my constituency, and international air travel is necessary for trade; without it, there is no global Britain. Given that, instead of introducing measures to close Britain off to the rest of the world, why are the Government not taking a lead in developing an international aviation health screening standard, to save jobs and ensure that Britain is open for business?” she said.

Mr Johnson said that although widespread job losses were “inevitable”, his government would take an active and interventionist approach to supporting the economy. And he suggested that all young people would be guaranteed apprenticeships.