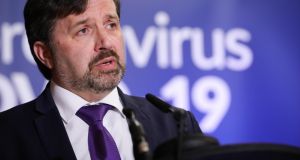 Northern Ireland’s Health Minister Robert Swann: said co-ordination between the two jurisdictions was being worked on by the Executive office in the North and by the Taoiseach’s office. Photograph: Kelvin Boyes/Press Eye/PA WireN

Discussions are “ongoing” between Dublin and Belfast around sharing information to ensure that anyone who arrives in Ireland and then crosses the Border can be traced, a Stormont committee has heard.

As of last week, all passengers arriving into the State at ports and airports are legally required to complete a form giving their contact details and the address where they will be self-isolating.

Anyone travelling on to the North does not have to provide further contact information, and residents of Northern Ireland must only fill out part of the form.

From June 8th, anyone arriving into the UK from outside the Common Travel Area will have to self-isolate for 14 days.

The North’s health minister, Robin Swann, told a meeting of the Assembly’s health committee on Wednesday that “the conversation is going on, North and South, to make sure the two systems are compatible and we’re giving the same advice” whether somebody landed in Belfast and travelled to Dublin, or vice versa.

He said that while there are guidances that will be specific to each jurisdiction, the 14-day period of self-isolation for international arrivals “is going to be a requirement for both.”

Eight more coronavirus-related deaths were reported by the Department of Health (DoH) in Northern Ireland on Wednesday, bringing the total number of fatalities to 534. Two of those deaths took place in the last 24 hours, and six had occurred previously but were recorded yesterday.

Eight more cases have been identified out of 888 individuals who were tested in the last 24 hours. The total number of individuals who have tested positive for coronavirus in Northern Ireland now stands at 4,740.

Mr Swann faced questions from the deputy chair of the health committee, the DUP MLA Pam Cameron, who asked if it was currently the case that someone could arrive in Northern Ireland via Dublin and authorities would we not know they have arrived or where they have been.

“That is correct,” he said. “We don’t have that travel advice in the UK yet no matter where they are landing from, so it’s about the sharing of the information.”

Co-ordination between the two jurisdictions, he said, was being worked on by the Executive office in the North and by the Taoiseach’s office.

In a statement, the Department of Health in the Republic said discussions were “ongoing in relation to what additional information-sharing or other arrangements may need to be put in place as both jurisdictions look to strengthen the arrangements in place for arriving international passengers.”

Both jurisdictions have previously confirmed that contact tracing is operating on an all-island basis. The department said that in regard to a case on a flight or a ferry, “relevant information is shared without delay between public health authorities in both jurisdictions under the International Health Regulations, as occurred in relation to the very first case of Covid-19 on the island of Ireland in late February.”

Seperately, the North’s justice minister has warned that lockdown measures could be re-imposed in Northern Ireland if the public fail to adhere to social distancing guidelines.

Naomi Long told the BBC that if people continue to “push the boundaries, to push the limits, then we will need to renew the relaxations that have been put in place.”

She also said that as the lockdown eased, people would be required to “self police”, adding “we can’t police people’s back gardens, we can’t police their living rooms.”

On Wednesday the chief executive of Translink, Chris Conway, told the Executive’s Infrastructure committee that at the weekend they had to send up to a dozen employees to the unmanned railway halt at Helen’s Bay, on the Co Down coast, to deal with the crowds of young people who had travelled to the beach.

There was “a lot of drink and drugs taken,” he said, and there was a danger of “crushing or falling onto the tracks.” Mr Conway said their trains removed 1,400 people from the area in a few hours.

Meanwhile the Orange Order unveiled plans to mark the Twelfth of July online.

The four-day event, which will run from July 10th, commemorates the 330th anniversary of the Battle of the Boyne.

The Order’s deputy Grand Master, Harold Henning, said that “together we can make it a fun-filled, extra-special - socially distanced Twelfth - that will be talked about for years.”