Coronavirus: A further 123 cases reported in meat processing plants over past week

A further three deaths of people diagnosed with Covid-19 have been reported by the National Public Health Emergency team, bringing the total number of deaths in the Republic to 1,659. Video: RTE News Now 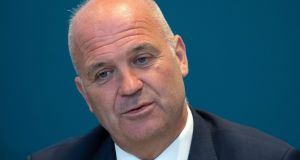 A further 123 cases of Covid-19 have been reported in meat processing plants over the past week, public health officials have said.

The fresh cases bring the total number of cases of the virus in meat plants to 1,048, while another seven staff were hospitalised in the last week.

A further three deaths of people diagnosed with Covid-19 have been reported by the National Public Health Emergency team. This bring to 1,659 the total number of deaths in the Republic.

NPHET also reported another 47 new cases of the disease at its briefing on Wednesday. This brings the total number of cases to 25,111.

NPHET meets on Thursday to decide on its recommendations to Government in relation to the planned further easing of restrictions next week.

Chief medical officer Dr Tony Holohan said there was as yet nothing in this week’s trends to suggest “we won’t be in a position to make a recommendation” to proceed to phase 2 of the Government’s roadmap on June 8th.

However, there were still another five days to go before that date, he pointed out.

Dr Holohan said the restrictions introduced in March still enjoy a high level of compliance from people despite some “public examples of exceptions”.

“In the main, the public is staying with us,” he said.

As the measures are eased, the measures that people take individually will grow in importance in terms of continuing to curb the virus, he said.

Asked about reports of some publicans saying they want to press ahead with re-opening, Dr Holohan said he would “counsel against that”.

Some 91 per cent of people who contracted Covid-19 have recovered. Of 25,056 cases up to Sunday, 20,557 had recovered in the community and 2,141 recovered following discharge from hospital.

Some 42 per cent of cases were treated in hospital and 5 per cent were admitted to ICU. The proportion of cases with underlying conditions now stands at 90.2 per cent.

Of the total of 409 people who have been admitted to intensive care, 37 remained there on Wednesday.

There has been no change in the number of clusters at residential care facilities, at 472.

Close contacts now account for almost six out of every 10 cases, while community transmission occurred in four out of 10 cases. The number of healthcare worker cases has passed the 8,000 mark (8,004).

Across at-risk groups, one new cluster has been reported in the past week, in a direct provision centre.

There have been no further deaths among at-risk groups.