All pupils will not be able to return to class at same time, INTO warns 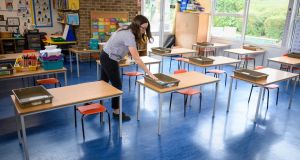 A teacher distributes individual student stationary packs ahead of the return of students to a school in London this week. The Irish National Teachers’ Organisation has warned against a rush to reopen schools. Photograph: Leon Neal/Getty Images

It will not be possible for all pupils to be in a classroom at the same time when schools reopen, the head of the primary teachers’ union has said.

John Boyle, general secretary of INTO, said the fact that we have the largest class sizes in Europe means many pupils will not be able to resume under current social-distancing guidelines.

The average class size in Irish primary schools is 25, compared with an EU average of 20, according to the OECD. Many Irish schools, however, have in excess of 30 pupils in “supersized” classes.

He also warned against a rush to reopen schools ahead of late August or September and said researchers are still divided on whether children are less likely to become infected or spread the virus.

“It’s a fact too that some schools in other jurisdictions that opened early had to close again. France and South Korea are two clear examples. We simply cannot afford to make that mistake here,” he writes in an opinion column in today’s Irish Times.

“There is now a strong consensus that we can reopen our schools safely in August and we must all play our part to ensure this becomes a reality. Our pupils, their parents and of course primary teachers deserve nothing less.”

Department of Education officials are understood to be examining the possibility of large groups or even entire classes staying in “protective bubbles” when schools reopen.

This could, if permitted under revised public health advice, allow the majority of children resume school on a full-time basis.

Minister for Education Joe McHugh warned last week all students would not be able to attend school even if social-distancing requirements were to be reduced from two metres to one. He also said he would not accept a “half-return” with students attending school only some of the week.

Department sources have since confirmed that segregating classes or large groups is under consideration.

Mr McHugh’s officials are drawing up a roadmap for reopening schools, which is due to be published next week. His officials have been examining the experiences of countries such as Germany, France, Denmark and Greece in reopening their schools.

The roadmap is likely to provide guidelines for schools to help prepare them for new public health measures such as regular cleaning and one-way entry and exist systems.

The department has estimated that the cost for providing additional hygiene supports – such as hand sanitiser or cleaning services – is likely to be in excess of €25 million between September and December.

Meanwhile, department officials are also working on a summer programme that could see some disadvantaged – or Deis – schools reopen in July or August to provide “catch-up” support to at-risk pupils.

Under this approach, existing social inclusion programmes, such as numeracy and literacy programmes, are being considered.

The programme would also provide separate support for pupils with special needs, such as those with intellectual disabilities, autism or Down syndrome.

It is understood three options are being considered including a home-based element, in which the family would be funded to hire a tutor for their child.

There may also be a school-based element, where tutors could provide support in either special or mainstream schools.