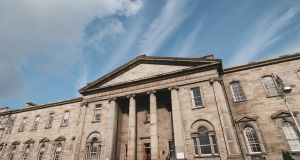 The approach taken by the Mater was intended to protect confidentiality and respect the dignity of staff being tested, according to the HSE report. Photograph: Bryan O’Brien

Delays in reporting almost 250 Covid-19 cases among staff of the Mater hospital arose from its historic practice of anonymising their details at the time of laboratory test results, according to a report into the matter.

Because the personal details were held by the hospital’s occupational health department, lab staff in the hospital were unable to upload the information to the national surveillance system for the disease with the accompanying names and dates of birth, the Health Service Executive report states.

In mid-May, chief medical officer Dr Tony Holohan revealed the late reporting of the cases at a National Public Health Emergency Team briefing. He did not name the hospital involved but said some of the cases dated back to mid-March and he was unable to give an assurance that contact tracing for the cases had been completed.

It later emerged the Mater was the hospital and an investigation was ordered.

The approach taken by the hospital was intended to protect confidentiality and respect the dignity of staff being tested, according to the report. “This approach was introduced to encourage staff to seek a laboratory test when concerns of an infection presented.”

The Mater started testing staff for Covid-19 on March 14th, but public-health doctors in the HSE sought the non-anonymised information so they could reconcile lab data with data from other sources, including contact tracing.

They ordered the upload of information to be paused on April 21st to allow for the anonymisation issue to be resolved, the report says. “There was a senior personnel absence in the period after the 21st April, 2020,” it adds.

Uploading of the remaining information restarted on May 12th after this issue was “concluded”, it states. This led to the batch reporting of the 244 cases.

The Mater says it had completed contact tracing of cases within 24 hours of a positive test result, and the report says the delays in uploading information “did not delay any critical public health actions”.

The report recommends the HSE seek assurances from hospital groups that they have processes in place to flag any future impediments to uploading of Covid-19 test results for healthcare workers.