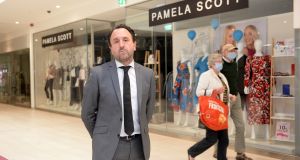 Screens at tills, reduced access to changing rooms and queue management are among the measures being introduced by Irish retailers in preparation for the reopening of stores on Monday.

Clothes retailer Pamela Scott is opening less than half its 28 shops in the initial phase. Its managing director Richard Barron told The Irish Times that the model of retail in Ireland had effectively been “broken” by the Covid-19 crisis, with the shopping experience and the traditional interactions between staff and customers under grave threat.

Mr Barron said the company only made the decision earlier this week to reopen as the second phase of the exit from lockdown begins on June 8th. “There has been a lot to do with the first thing being to clean the shops thoroughly as no one had been in them since we closed on March 16th.

He said plexiglass screens were being installed at tills alongside hand sanitiser stations. “We have PPE for staff and will be constantly cleaning the shops. We have reminders about cough etiquette and, depending on the level of footfall, we will have people to manage queues.”

He said each shop had been measured to establish how many people could be allowed in at one time, although he pointed out that most retailers found getting shoppers through their doors difficult at the best of times, and now was a long way from the best of times.

Mr Barron suggested that among the biggest challenges to be faced was the management of changing rooms.

“We are going to extend the exchange period from 30 days to 60 days because we want to discourage people from trying clothes on.

“However, while we are not encouraging people to use the changing rooms, we will facilitate it if customers want that and have a process in place. If someone buys something after trying it on, that is fine and if they don’t then we will take them to the stock room upstairs and steam them and leave them for 24 hours before they go back on the shelves.”

He said retailers were “being asked to work almost like hospitals” and pointed to the requirement to have a dedicated room where people can be isolated if they develop symptoms in the store. “We will be able to do whatever is required but it might be harder for smaller retailers.”

Fields the Jeweller is opening three of its 14 stores – on Dublin’s Grafton Street and Henry Street and on Shop Street in Galway – on Monday.

“We need to open and have a very comprehensive programme for social distancing in place where we can,” said managing director Noel Coyle.

He pointed out that as a jeweller, his business faces different challenges to others as it is a close-contact operation and very tactile.

“We are trying to keep as much of that as we can while keeping people safe,” he said.

The shop is trialling virtual consultations using Zoom and Google Hangouts, and staff will be equipped with face masks and gloves. There will be sanitisation stations and plexiglass screens fitted at the tables where jewellery is tried on.

“We will be cleaning the jewellery after every interaction, it will be properly sanitised before going back on the shelves or into cases,” he said.

“We are preparing to adapt as we go,” he added. “ People are used to queuing outside supermarkets and homeware stores, but it’s going to be different for smaller shops.”

Brown Thomas and Arnotts have also had to adapt and, while they were not due to reopen until the end of June, they have both split their ground floors into separate units with separate entrances, and those small sections will be able to resume trading on Wednesday in the case of the former and Thursday for the latter.