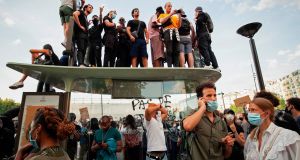 Protesters demonstrate in front of Paris courthouse against police violence. Some 20,000 people defied a ban in Paris to protest the 2016 death of a young black man in French police custody. Photograph: Michael Rubinel/AFP via Getty Images

It happened on Tuesday night, not in a US city but in Paris, where the Truth for Adama group defied police orders to gather outside the Palais de Justice. Smaller protests were held in Lille, Lyon and Marseille.

Adama Traoré was 24 when he was arrested by gendarmes in the Val d’Oise, north of Paris, in July 2016. Three gendarmes pinned the young African to the floor, face down. Traoré died. Three medical opinions requested by the court, the most recent of which was issued last week, concluded that Traoré died of heart failure related to stress, physical exertion and the consumption of cannabis. The gendarmes were cleared of responsibility.

On Tuesday, a new medical opinion carried out on behalf of Traoré’s family contradicted earlier studies. Traoré died of asphyxiation, because of the way police pinned him down, it said.

“George Floyd’s body took the full weight of policemen,” Assa Traoré, age 35, the sister of Adama and the leader of Truth for Adama, said at Tuesday night’s demonstration, referring to the African-American man whose death in Minneapolis has led to widespread protests in the US.

“Adama took the weight of three gendarmes, more than 250 kilos. Both said the same words before dying: ‘I can’t breathe’.”

Overnight, similarities between the deaths of Floyd and Traoré, between police violence in the US and France, became a red-hot political issue.

“It is impossible to walk through the streets of Paris without thinking of George Floyd and all those who have fallen to police violence,” Assa Traoré told the crowd, alternating names of the victims in the US and France.

After Wednesday’s weekly cabinet meeting, government spokeswoman Sibeth Ndiaye, who was born in Senegal, called for calm. The situation in France was “not comparable” with that in the US, she said. “I don’t think you can say France is a racist country.”

Comparison with the US was rejected out of hand by the French conservative party Les Républicains. It was “inadmissible” that the protest took place when the medical state of emergency declared because of the Covid-19 pandemic forbids gatherings of more than ten people, LR senator Bruno Retailleau said.

“It is also unacceptable that some in the Adama Traoré memorial committee are establishing a link between what is going on in the US and what allegedly happened four years ago in France.”

French media reports said US police kill about 1,000 people each year, while French police kill between ten and 15.

The official French position “has always been to deny the racist character of police violence in France”, the sociologist Sébastien Roché, a leading expert on the French police, told France Info radio.

Over the past ten years, Roché said, studies by the European Agency for Fundamental Rights, the official but independent rights defender of the republic, the national demographics institute Ined, the national research centre CNRS and the political science institute Sciences Po had “all shown the existence of police discrimination in France, whether in Marseille, Lyon, Grenoble or Paris”.

Racial profiling is the most widespread complaint of Arab and African minorities in France. Police have used racist epithets in several videos posted recently on social media. On May 12th, the rights defender Jacques Toubon, a former conservative justice minister, denounced what he called “discriminatory harassment” by police of 18 black and Arab youths in one Paris district over a two-year period.

If there is a common point between the US and France, France Inter radio’s political editorialist Thomas Legrand said, it is that their respective “forces of order are not inherently racist, but real racism exists in their ranks, and this racism is insufficiently recognised and combated by the authorities”.

A major difference, Legrand noted, was that “in the US, the head of state is a president who openly supports racist movements”.