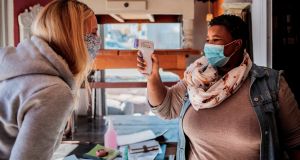 A worker taking the temperature of a customer in a furniture shop in Johannesburg, South Africa. Photograph: Luca Sola/AFPvia Getty Images

South Africa’s government has been ordered to review and amend its coronavirus lockdown regulations in a court decision that found many of them to be unconstitutional and invalid.

In his judgment on Tuesday, Pretoria high court judge Norman Davis ruled that an “overwhelming number” of lockdown regulations were unjustifiable, and they had little or no regard for how they impacted on people’s constitutional rights.

The judge gave the government 14 days to fix “deficient” regulations that were not connected to slowing or limiting the spread of Covid-19, although he said they would remain in place in the meantime.

South Africa has adhered to a strict five-level risk-adjusted approach to tackling coronavirus since the government first introduced the lockdown on March 26th, three weeks after it recorded its first case.

The country is currently operating under level three restrictions, which allow the majority of economic sectors to function under strict safety conditions. But social gatherings and events, most amateur sports, the sale of tobacco, movement between provinces and international travel remain banned.

The government was widely praised for its initial response to the pandemic as the speed with which it acted slowed the spread of the virus, giving the country vital time to prepare its weak healthcare system for the expected wave of infections.

As of June 2nd, there were 35,812 confirmed cases of Covid-19 in South Africa and 755 related deaths. The peak of the country’s infection rate is expected in late August or September.

However, President Cyril Ramaphosa’s administration has faced growing criticism in recent weeks over the seemingly arbitrary way in which some restrictions are eased as the country drops down the lockdown levels while others are kept in place.

Many South Africans have asked why, for instance, religious gatherings of up to 50 people are allowed under level three restrictions, but a person socialising with a small group friends in their home remains off limits.

In his ruling Judge Davis also picked out level three and four restrictions that relate to funerals, informal workers and the amount of time a person can exercise outside their home each day as examples of “irrational” rules introduced by government.

“Restricting the right to freedom of movement in order to limit contact with others to curtail the risks of spreading the virus is rational, but to restrict the hours of exercise to arbitrarily determined time periods is completely irrational,” the judge said.

On Wednesday health minister Zweli Mkhize defended the lockdown rules, saying mistakes were bound to happen in an unprecedented situation.

“We are going to study the judgment to see if there is a need for corrections to be done, and how these corrections can help us to continue with the containment [of the virus],” he said in an interview with radio station 702.