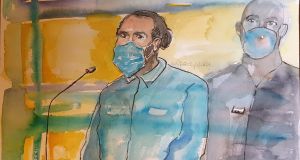 A suspected jihadist gunman has gone on trial in Paris on terror charges for moving through a train in 2015 with an arsenal of weapons and shooting one passenger.

Ayoub El Khazzani was brought down by three American tourists in the incident, which Clint Eastwood turned into a Hollywood thriller.

The scene five years ago on the fast train from Amsterdam to Paris is the focus of the month-long trial of Mr Khazzani, with evidence expected from the two US servicemen and their friend.

Their lawyer, Thibault de Montbrial, said in court that their “very brave intervention” had thwarted a “slaughter”.

“This terror attack could have killed up to 300 people based on the number of ammunition that was found on the terrorist and in his bag,” he said.

With Mr Khazzani in court, the trial opening on Monday was largely taken up with procedural issues, including whether Mr Eastwood’s presence is needed.

That question was not immediately resolved. The actor-director has so far not responded to a summons.

Mr Khazzani listened silently on Monday as a judge detailed his alleged plot to unleash mass slaughter on the high-speed train before he was tackled and subdued by the American tourists.

The judge said Mr Khazzani intended to “kill all the passengers” aboard the train but “lost control of events”.

Mr Khazzani, a 31-year-old Moroccan, spent several months in Syria and boarded the train in Brussels armed to the hilt, authorities say.

He is charged with attempted terrorist murder for the incident.

If convicted, he faces a maximum sentence of life in prison.

Three others, who were not on the train, are also being tried for their roles as alleged accomplices.

Bilal Chatra (24), an Algerian member of the so-called Islamic State group, would have been the second man on the train but dropped out of the plot a week earlier, it is alleged.

He had left Syria for Europe before the incident to set up the exit route, prosecutors allege.

Two other men, Mohamed Bakkali and Redouane El Amrani Ezzerrifi, are also accused of providing help for an attack.

The trial serves as a bridge to the massacre of 130 people in attacks in Paris three months later, on November 13th, 2015, at the Bataclan music hall and restaurants and cafes.

The man considered the likely mastermind of those attacks, Abdelhamid Abaaoud, was the behind-the-scenes force of the attempted train attack, planned in Syria, according to the prosecution.

Abaaoud travelled from Syria to Belgium with Mr Khazzani to organise attacks in Europe, and was holed up with him and Mr Chatra in a Brussels apartment, according to the prosecution.

Abaaoud was killed by French special forces days after the Bataclan attack.

Mr Khazzani “knowingly followed Abaaoud, but it’s been years since he was in a jihadi mindset”, his lawyer Sarah Mauger-Poliak said in a phone interview.

“He is very affected and regrets having allowed himself to become indoctrinated in propaganda.”

Mr Khazzani bought a train ticket at a station in Brussels on August 21st, 2015, for a 5.13pm departure.

He was armed with a Kalashnikov, nine clips with 30 rounds each, an automatic pistol and a cutter, according to investigators.

Once on the train, he lingered in a toilet between carriages and then emerged bare-chested with a Kalashnikov, they said.

One waiting passenger struggled with the gunman, then a French-American, Mark Magoolian, wrestled the Kalashnikov away – before being shot himself by a pistol as he headed to carriage number 12 to warn his wife.

Spencer Stone, a then-23-year-old US airman, and Alek Skarlatos, then a 22-year-old US national guardsman recently back from Afghanistan, then snapped into action out of what Mr Skarlatos said at a news conference days later was “gut instinct”.

Mr Stone and Mr Skarlatos moved in to tackle the gunman and take his gun.

The third friend, Anthony Sadler (23), then a student, helped subdue the assailant.

A British businessman then joined in the fray.

Mr Stone said he “just stuck two of my fingers in his hole and found what I thought to be the artery, pushed down and the bleeding stopped”.

The train rerouted to Arras, in northern France, where Mr Khazzani was arrested.

Mr Khazzani had left Morocco aged 18 to join his family in Spain.

He told investigators that Abaaoud wanted him to kill only the American military men, a line he was likely to maintain during the trial.

The investigating judges consider it a dubious claim, in part because their presence on the train could not be known in advance and they were in civilian clothes.

That defence also fails to chime with Abaaoud’s goal of killing a maximum number of people during attacks. – PA