US secretary of state to Pompeo visits West Bank settlement 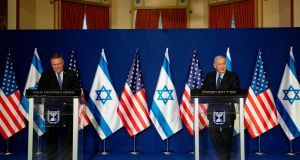 Mike Pompeo, during the first visit by a United States secretary of state to a West Bank settlement since Warren Christopher, has declared that settlement goods sold in the US will now be labelled “Made in Israel”.

Reversing US policy for 25 years, which required such products to be labelled as made in the West Bank, Mr Pompeo said the new guidelines “ensure that country of origin markings for Israeli and Palestinian goods are consistent with our reality-based foreign policy approach”.

Mr Pompeo made the announcement during a visit to the Psagot winery near the West Bank city of Ramallah. The settlement winery had named one of its brands Pompeo earlier this year.

The decision comes a year after Mr Pompeo said that Israeli settlements do not contradict international law in a move that angered Palestinians who seek to establish an independent state in the area that was captured by Israel from Jordan in the 1967 Six Day War.

The US decision on the status of settlements came partly in response to a European Court of Justice ruling in 2019 mandating that EU countries must identify products made in Israeli settlements on their labels.

Palestinians condemned Mr Pompeo’s unprecedented visit to a settlement, along with the decision to label exports from settlements as Israeli.

“The decision blatantly violates international law,” said Nabil Abu Rudeineh, a spokesman for Palestinian president Mahmoud Abbas, dismissing it as yet another biased pro-Israeli move by the Trump administration.

In what is likely to be his last visit to the region as secretary of state, Mr Pompeo also visited another area of disputed land – the Golan heights, captured by Israel from Syria in the same war. President Donald Trump, in another dramatic shift in US policy, in 2019 recognised Israeli sovereignty over the area.

“You can’t stand here and stare out at what’s across the border and deny the central thing that President Donald Trump recognised. This is a part of Israel,” Mr Pompeo said.

Syria called the American declaration “a blatant attack” on its sovereignty. Before his visit to the West Bank and the Golan heights, Mr Pompeo had another parting gift for prime minister Binyamin Netanyahu. Speaking at a joint news conference in Jerusalem, he declared that Washington would withdraw funding from groups supporting the BDS (Boycott, Divestment, Sanctions) movement in a move Mr Netanyahu described as “simply wonderful”.

“We will recognise the global BDS campaign as anti-Semitic,” said Mr Pompeo. “The time is right. We want to join all the other nations that recognise BDS for the cancer that it is.”