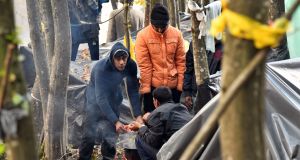 Migrants in woods near the northern Bosnian town of Velika Kladusa. Hundreds of migrants are stuck in forests as they repeatedly try to get into Croatia. Photograph: Elvis Barukcic/AFP via Getty Images

Hundreds of Bosnians have protested after a Sarajevo man was allegedly killed in a fight with migrants in the city, amid warnings of a potential winter humanitarian crisis in a country where thousands of migrants are now sleeping rough.

Demonstrators accused officials and police of mishandling an influx of migrants to Bosnia, and some said they feared for their safety after Jasmin Berovic (36) was stabbed to death and two of his friends were hurt in a fight in the Ilidza suburb of Sarajevo on Tuesday. A Moroccan man was detained in connection with the incident on Thursday.

More than 60,000 migrants from the Middle East, central Asia and north Africa have reached Bosnia since 2018, when it became part of their main route through the Balkans due to tightening border controls elsewhere in the region.

While most have managed to cross into Croatia and continued towards richer EU states, up to 10,000 migrants are still in Bosnia, and about 3,000 of them are now sleeping in parks, forests and empty buildings as cold, wet weather draws in.

Aid groups have warned that a lack of accommodation for migrants will lead to them seeking shelter in towns and unoccupied houses during winter, and some may try to steal food or clothing as their situation becomes more desperate.

However, local authorities are reluctant to provide facilities for migrants, and last month officials in northwestern Bosnia, where most migrants are gathered near the Croatian border, closed down a 1,500-bed reception centre in the city of Bihac and threatened to shut two others nearby.

“This is what the start of a humanitarian crisis looks like,” Peter Van der Auweraert, Bosnia representative for the International Organisation for Migration, said at the time.

“Beyond the inhumanity of it all, it is difficult to see how [this] action addresses the legitimate concerns of local citizens. It will only add to the number of people already sleeping rough in and around Bihac.”

The Danish Refugee Council, which also works in northwestern Bosnia, warned last week that “the closure of reception facilities... will drastically destabilise the humanitarian situation in the country and will inevitably put refugees, migrants and asylum-seekers residing outside of reception centres at very serious risk”.

“In a worst-case scenario this could lead to some 5,500 refugees, migrants and asylum-seekers residing outside of reception centres and in need of food, warm clothes, blankets and medical assistance over the course of the winter months,” said Nicola Bay, the organisation’s country director in Bosnia.

Migrants often accuse Croatian police of violently forcing them back over the frontier into Bosnia. The office of European Ombudsman Emily O’Reilly is now investigating whether the European Commission has done enough to check that border operations which “receive EU funds ensure respect for fundamental rights”.