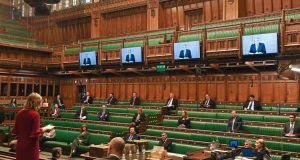 A week after Dominic Cummings walked out through the front door of Downing Street, the promised reset of Boris Johnson’s government has had a bumpy beginning. The prime minster, self-isolating after meeting an MP who tested positive for coronavirus, has had to make his big policy announcements on climate change and defence spending by video conference.

During a Zoom call with Conservative MPs from the north of England on Monday, Johnson described devolution in Scotland as a disaster and “Tony Blair’s biggest mistake”. The remark brought an avalanche of condemnation on his head, including from Scottish Conservatives, who saw the gaffe as a gift to the Scottish National Party (SNP) ahead of next May’s Holyrood elections.

On Thursday afternoon EU chief negotiator Michel Barnier said one of his staff had the virus and that he and his British counterpart David Frost “have decided to suspend the negotiations at our level for a short period”. With six weeks to go before the end of the post-Brexit transition period, the talks have already broken through a number of deadlines, and both sides agree that if a deal is to be done it must be in the next couple of weeks.

Despite these mishaps, the power struggle in Downing Street has given Johnson an opportunity to make a fresh start just as he did as mayor of London, when he fired four of his closest advisers within months of taking office. Under Cummings and director of communications Lee Cain, another Vote Leave veteran who left last week, Downing Street was on a permanent war footing against the media.

Television and radio programmes viewed as unfriendly faced a boycott so that, for example, no minister appeared on Piers Morgan’s Good Morning Britain on ITV for more than six months. This week saw that boycott lifted, and Johnson’s new press secretary, Allegra Stratton, told reporters from the parliamentary lobby on Wednesday how much the prime minister admired them.

“The prime minister, as a former journalist, has spoken publicly about the positive role the media has played during this pandemic in spreading information about what we need people to do, to observe social distancing and so on. And indeed, inside the building, quite often the prime minister can be heard saying he has seen such-and-such a TV broadcast, which was very powerful and what should we be doing about the particular issue,” she said.

“It’s certainly my understanding that the prime minister believes the media has had a very good and powerful role during the pandemic so far.”

In his ill-fated call with backbenchers from the north of England, Johnson reassured them that Cummings’s exit did not mean he had abandoned his “levelling-up” agenda in favour of a David Cameron-style appeal to moderate liberals in the southeast. But his framing of the climate change announcement, which included a ban on the sale of petrol and diesel cars and vans from 2030, showed he can play to two audiences at once.

The measures to scale up Britain’s ambitions on tackling climate change appealed to many affluent, highly educated voters, but Johnson sold the same measures as agents of economic renewal in the former industrial heartland constituencies he captured from Labour last December. He promised that many of the 250,000 jobs the plan would “create or support” would be in the “red wall” regions of the midlands and the north of England.

The 10-point plan sets the stage for Johnson to make climate action a major focus of his government next year as Britain prepares to hold the COP-26 climate summit next November. The prime minister hopes that taking a leadership role on the issue will help him to forge a close relationship with Joe Biden and to rid himself of his image in Washington as “Britain Trump”.

Thursday’s announcement of a multibillion pound increase in defence spending will also help to remind the incoming president that Britain remains Washington’s most reliable military and intelligence ally. And a bigger military budget also appeals to voters in red-wall seats who rejected Labour last time partly because they viewed Jeremy Corbyn as insufficiently patriotic.

Conservative MPs are almost universally relieved at the departure of Cummings, who treated them with candid contempt, and they are eager for Johnson to regain his former status as one of Britain’s most popular politicians. In their current mood, only a small number are likely to oppose any deal agreed with the EU in the coming weeks – if Johnson himself can make the necessary compromise to allow it to happen.