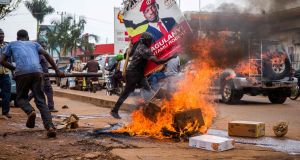 Sixteen people have been killed in Uganda in operations by military and police personnel battling to put down protests over the arrest of presidential candidate and pop star Bobi Wine, authorities said on Thursday.

Since early Wednesday youths have been burning tyres and blockading streets in the capital Kampala and other towns to demand Wine’s release.

On Thursday soldiers clutching AK-47 assault rifles fanned out across the city, some in armoured vehicles, and together with police used teargas, live bullets and water cannon to disperse and detain protesters.

In a statement, police said a total of 16 people had died while 65 were injured, and added the death toll could rise. A further 350 were arrested in the clashes.

Those arrested are to be charged with various offences including “participating in unlawful demonstrations, inciting violence, malicious damage to properties, assault, theft and robbery”.

Wine, whose real name is Robert Kyagulanyi, was detained on Wednesday after authorities accused him of violating anti-coronavirus measures by holding mass rallies.

He has emerged as the strongest challenger to veteran leader Yoweri Museveni, who has ruled the east African country of 42 million since 1986 and is Africa’s third-longest reigning leader.

Voters are due to go to the polls on January 14th to elect their next president and lawmakers.

Moments after he was detained while campaigning in eastern Uganda, spontaneous protests erupted in Kampala and several major towns. Security personnel responded with tear gas. A journalist who spoke to Reuters on condition of anonymity said he had seen troops firing automatic rifles.

Wine has amassed a large following among the country’s youth, attracted by his bold criticism of government mingled in his lyrics.

“This is a war-like situation, so the army has to deploy,” said army spokeswoman Brig Flavia Byekwasos.

“You can see what is going on, people are being stoned, people are being killed, vehicles are being vandalised, tyres everywhere,” she said. “These things are spontaneous on all streets, so police cannot handle such a situation.”

Authorities have been rattled by Wine’s surging support, especially among the youth, ahead of the election. Mr Museveni (76) is seeking a sixth term in office.

Tension had been building up in Uganda over the conduct of political campaigns, since the electoral commission said earlier this month that the number of people at political meetings shouldn’t exceed 200. Critics said the guidelines favoured Mr Museveni, partly because he dominates prime time on radio and television.

Police had warned they would enforce the directives. Television footage showed barricades and burned tires on the streets of Kampala as protesters chanted Wine’s name and called for his release.

Fellow opposition leader Kizza Besigye said many people had been killed by the police and military. Police detained Wine at a rally he was attending in Jinja, about 80km east of Kampala.

The authorities have repeatedly arrested the 38-year-old politician, a vocal critic of Mr Museveni’s hardline rule. “The arrests, as anticipated by our joint intelligence components, sparked off incidents of violent demonstrations,” police said in its statement.

Mr Museveni became eligible to run in election after parliament, which is dominated by ruling party lawmakers, abolished an age limit of 75 years for presidential candidates. Lawmakers in 2005 abolished a two-term limit for presidents, allowing Mr Museveni, who first ruled for 10 years without being elected, to prolong his stay in power. – Reuters/Bloomberg