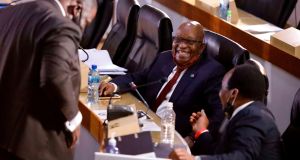 Former president of South Africa Jacob Zuma departed from a public sector corruption inquiry on Thursday in defiance of a summons, after his application to have the presiding judge recuse himself was dismissed.

Deputy chief justice Raymond Zondo rejected Mr Zuma’s legal argument that he should not hear the former president’s evidence, saying there was no merit to the reasons his lawyer, Muzi Sikhakhane, put forward for the recusal.

After dismissing the recusal bid, Mr Justice Zondo indicated the Johannesburg-based Judicial Commission of Inquiry into Allegations of State Capture, Corruption and Fraud in the Public Sector would proceed and hear testimony from Mr Zuma after a short break.

However, when proceedings reconvened, the judge was told Mr Zuma had left without his permission, despite having been legally summoned to appear at the inquiry this week.

Mr Justice Zondo said Mr Zuma’s decision to leave was “a serious matter” and postponed the inquiry to Monday so he could decide what to do.

The former president could be held in contempt of the inquiry for leaving without permission, which is a criminal offence under South Africa’s Commissions Act.

Ahead of his appearance Mr Zuma had called on Mr Justice Zondo to step aside, saying the two men had a close personal relationship, and that the deputy chief justice and some witnesses were biased.

Mr Sikhakhane said the inquiry had added to the narrative that his client had “messed up the country” by hearing “sweetheart witnesses”, and this had left Mr Zuma with the impression it was “the grave to bury him” in.

However, Mr Justice Zondo denied the accusations and maintained he and Mr Zuma were not friends, before stating there was no sound explanation as to why the former president would bring up such an issue more than two years after the inquiry had begun.

“The application for my recusal is accordingly dismissed,” Mr Justice Zondo concluded.

In response, Mr Sikhakhane said his client would take the decision on review and lodge a complaint with the Judicial Service Commission regarding Mr Justice Zondo’s handling of their recusal application.

Mr Zuma, who was removed from power in February 2018 by the ruling African National Congress party over corruption allegations, first appeared at the inquiry in July 2019.

To date, 35 of the witnesses who have testified before Mr Justice Zondo have accused the former president of graft while in office. Mr Zuma has denied any wrongdoing in relation to these accusations.

But since his first inquiry appearance he has failed to turn up at the inquiry on several occasions despite promising to co-operate with investigators and being asked to attend by Mr Justice Zondo.

As a result, Mr Zuma was issued with a legal summons compelling him to appear this week.