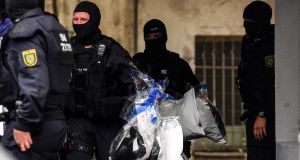 A year after Germany’s most spectacular jewel heist ever, Berlin police launched an equally dramatic raid on Tuesday morning to detain the suspected thieves.

A year ago, axe-wielding intruders in Dresden’s former royal palace smashed open three display cases in the fabled Green Vault jewel room and snatched 94 pieces of priceless pearl and diamond jewellery. Minutes later, all police found of the thieves was a trail of destruction – and a burnt-out getaway vehicle in a nearby car park.

Curators of the Green Vault were left speechless at the theft from the unique royal collection that had survived the eastern German city’s firebombing of 1945.

A year on, at dawn on Tuesday, more than 1,600 police officers fanned out across Berlin to arrest the suspected thieves. All are said to be members of the Remmo family, a German-Lebanese clan with a long criminal history in the capital.

Three men, two aged 23 and one aged 26, were detained and brought before a remand judge in Dresden. Two further suspects, twin brothers, are said to be on the run.

Video footage of the burglary shows two men cutting away a window grille early on November 25th last, before entering and exiting the building within five minutes. Security guards spotted the intruders on cameras but no alarm was sounded as, minutes earlier, a fire was set at a nearby electricity junction box to cut the power.

Investigators say two key breakthroughs lead to Tuesday’s police raids. On the window used to enter and leave the museum, forensic investigators found DNA traces of the perpetrators which could be linked to the suspects. In addition, police were able to link them to a Mercedes car, sprayed to look like a taxi, that the raiders used as a getaway car to drive back to Berlin.

Police said the brothers still on the run are no strangers to the law. They were part of the gang behind another spectacular heist, the theft of a 100kg gold coin from a Berlin museum in March 2017.

In September the brothers were handed jail sentences of three years each but are appealing the rulings and have yet to serve any jail time.

News of the arrests has given locals in Saxony some hope that their beloved royal jewels, collected by local King August the Strong in the 18th century, can be recovered and returned. The 3,000-piece collection was seized by the Red Army in 1945 and only returned to the Saxon capital in 1958. Their home, the Green Vault, was reopened to the public for the first time since the war in 2006, after a €45 million renovation.

While some experts say that because the stolen pieces are identifiable they couldn’t be sold on the open market, investigators have a more pessimistic view: that the jewels were cut up quickly after the raid and sold as individual stones.

“We would need quite a bit of luck to find them, a year after the event,” said Mr Thomas Geithner, spokesman for the Dresden police. “But hope always dies last.”